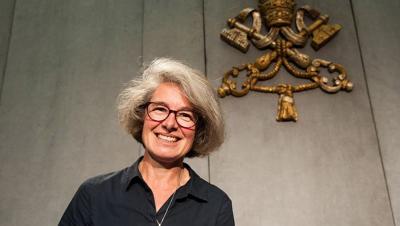 ROME - A woman will vote in the Synod of Bishops, an advisory body to Pope Francis, for the very first time, after Sister Nathalie Becquart was appointed co-undersecretary on Sunday.

Along with the somewhat unconventional appointment of Sister Nathalie, was that of Father Luis Marín de San Martín. These decisions “give a renewed impetus to the commitment to a synodal and missionary Church” says Cardinal Mario Grench. He will be working alongside both of these two new members of the assembly.

Sister Nathalie, born in Fontainebleau, France, was previously the director of the National Service for the Evangelisation of Youth and Vocations of the Conference of Bishops of France. She has expressed her happiness, saying she is now able to “serve the Universal Church”. Father Luis, who originates from Spain, has formerly been the Assistant General of the Order of St. Augustine.

Cardinal Grench says that Sister Nathalie’s new role “helps us to remember in a concrete way that in synodal journeys the voice of the People of God has a specific place and that it is fundamental to find ways to foster in them an effective participation of all the baptised.” This outlook had been embraced by the pope, as was seen in the Synod on Youth and the Synod on Amazonia, where new leadership positions were given.

Sister Nathalie will be granted the right to vote at the next Synod, which means that “a door has been opened”, according to Grench. Throughout his pontificate, it has been highlighted just how vital it is for women to be more involved in ecclesial decision-making processes. Allowing women the vote in synods numerous members of the Church, such as by cardinals, bishops and other synod participants, have wanted women to be involved in the voting process. Grench believes that this view has also been echoed by numerous Synod Fathers who want “the whole Church to reflect on the place and roles of women within it.”

On Feb. 10, 'We Are Church' said that the pope's "gesture toward the desired equal rights for women is rather half-hearted”, since Sister Nathalie shares the job of undersecretary with Father Luis. This group has gone on to say that the pope’s actions continue “to support the clerical hierarchy which marginalises lay people and women”.