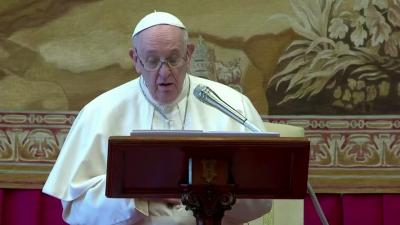 VATICAN CITY - On Monday, in his annual New Year speech to the diplomatic corps of the Vatican, Pope Francis addressed various global economic, environmental and health crises, calling for a unified response from global leaders.

The event was originally scheduled for Jan. 25, but the pope had to postpone due to health reasons.

He began by addressing the pandemic, saying that, “the need for closeness is all the more important, for it is clear that the virus knows no barriers nor can it be easily isolated. Overcoming it is thus a duty incumbent on each of us, as well as our countries.”

He continued that the pandemic has “shed light on the risks and consequences inherent in a way of life dominated by selfishness and a culture of waste, and it set before us a choice: either to continue on the road we have followed until now, or to set out on a new path.”

The pontiff encouraged governments to do more to guarantee universal access to healthcare, adding that “concern for profit should not be guiding a field as sensitive as that of healthcare.” To this end he suggested that “all states to contribute actively to the international efforts being made to ensure an equitable distribution of the vaccines, based not on purely economic criteria but on the needs of all, especially of peoples most in need.”

Moving on from the crisis currently dominating the headlines, he mentioned the environmental emergencies requiring action, naming the rising sea levels affecting nations in the Pacific, and the floods in Southeast Asia, especially Vietnam and the Philippines, “which have caused many deaths and left entire families without means of subsistence.”

“In Africa too,” he continued, “climate change, aggravated by reckless human interventions – and now by the pandemic – is a cause of grave concern. I think particularly of food insecurity, which in the last year has especially affected Burkina Faso, Mali and Niger, with millions of people suffering from hunger. In South Sudan too, there is a risk of famine and indeed a serious and persistent humanitarian emergency: over one million children are undernourished, while humanitarian corridors are often blocked and the presence of humanitarian agencies in the territory is restricted.”

The pope went on to criticise the action of many governments, saying that “humanitarian crises are aggravated by economic sanctions, which, more often than not, affect mainly the more vulnerable segments of the population rather than political leaders. While understanding the reasons for imposing sanctions, the Holy See does not view them as effective, and hopes that they will be relaxed, not least to improve the flow of humanitarian aid.

“Last year also witnessed a further increase in migrants who, as a result of the closing of borders, had to resort to ever more dangerous travel routes. This massive flow also met with a growing number of illegal refusals of entry, frequently employed to prevent migrants from seeking asylum, in violation of the principle of non-refusal. Many of those who did not die while crossing seas and other natural borders were intercepted and returned to holding and detention camps, where they endure torture and human rights violations.”

Building on this, he described the Holy See’s support of the International Organisation for Migration, and participation in the United Nations High Commissioner for Refugees, both of which aim to defend the rights of migrants.

Turning to more recent matters, the Pope criticised the coup in Myanmar as an attack on democracy, saying that "the path to democracy undertaken in recent years was brusquely interrupted by last week’s coup d’état. This has led to the imprisonment of different political leaders, who I hope will be promptly released as a sign of encouragement for a sincere dialogue aimed at the good of the country."

Throughout the hour long speech, the pope touched on crises developing in every corner of the world, from the effect isolation has had on the developed world’s mental health, to terrorism and the disarmament of nuclear weapons.

He concluded by saying, “I am convinced that fraternity is the true cure for the pandemic and the many evils that have affected us. Along with vaccines, fraternity and hope are, as it were, the medicine we need in today’s world.”