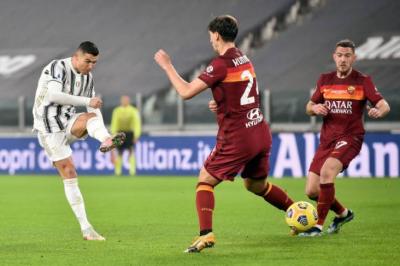 ROME - In the latest weekend of Serie A action, Juventus beat Roma to steal third place, while a win for Lazio against Cagliari takes them into fifth.

AC Milan strengthened their lead at the top of Serie A on Sunday after beating last place Crotone 4-0. Two goals for Zlatan Ibrahimovic brought the Swede to his 500th club goal, while the Croatian Ante Rebic added the other two.

In Turin, Juventus secured their sixth win in a row, beating Roma 2-0. Cristiano Ronaldo opened the scoring for the home side with a 13th minute shot drilled into the bottom corner from the edge of the box. The Portuguese forward thought he doubled his tally not long after, when his shot ricocheted down off the top of the bar, but goal line technology disallowed it, much to Ronaldo’s dismay.

An own goal by the Brazilian defender Ibanez finally gave Juventus their second in the 69th minute, from a dangerous cross that Ronaldo was poised to convert, had Ibanez not got there first. Roma put a lot of pressure on the Juventus defence throughout, having 14 shots at goal to Juve’s three, but the Juve keeper was never really troubled.

The victory saw Juve pass Roma to take third place, only five points behind Inter in second, and still with a game in hand.

In Rome, a 1-0 win for Lazio against Cagliari took them into fifth, overtaking Napoli, who lost 2-1 to 12th place Genoa. Napoli, however, also have a game in hand.

The captain Ciro Immobile scored the only goal for Lazio in the 61st minute, in a very dominant display by the home team. This marks the sixth league win in a row for a team that are slowly climbing the table, overcoming their poor form at the start of the season. The Sardinians meanwhile are sitting dangerously in the relegation zone.

Napoli’s loss away to Genoa, facilitated by two first half goals for Macedonia’s Goran Pandev, saw them slip down into sixth place. Matteo Politano managed to pull one back in the 79th minute for Napoli, who have now only won two of their last six games.

Inter’s 2-0 victory at Fiorentina on Friday briefly took them into first place, with their neighbours pushing them back into second after winning on Sunday. Only two points separates the top two. 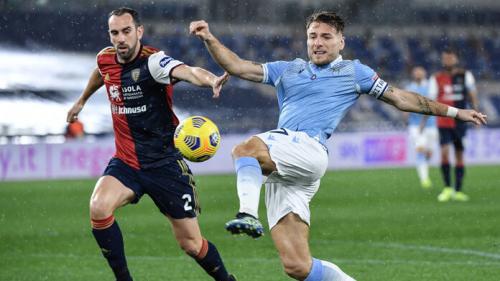