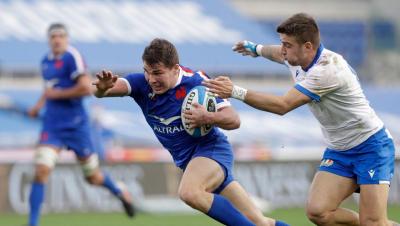 ROME - In a masterful performance on Saturday, France proved too much for Italy, beating the home side 50-10 in the opening match of the Six Nations.

An impressive French team showed right from the get go their determination to right the wrongs of last year’s Six Nations when they lost out to England only on goal difference. However, scoring seven tries past a very feeble Italy is not what’s going to win them the tournament, facing a much more competitive Ireland side next week.

Italy showed a few flashes of attacking brilliance in the first half, but too many mistakes and a strong French defence proved too much. The young Italian side didn’t seem to have the desire of the French team, and promising attacks often fell short, victim of a sloppy pass or knock on.

Though at times Italy didn't have the urgency of the French side, they managed to get one back in the 64th minute thanks to a brilliant solo chip and chase try by Luca Sperandio. France’s seven tries came from a mix of French brilliance, very often led by the top form scrum half Antoine Dupont, and lazy Italian defending. Twice Italy were left flat footed by the boot of Dupont, and twice France seemed to slip through the Italian line with ease and only a couple of passes on their way to the try line.

Elsewhere, a dominant Scotland beat England, the clear pre-match favourites, 11-6, the first time they have won at Twickenham for 38 years, thanks to a try from Duhan van der Merwe. Excellent performances by Stuart Hogg and the debutant Cameron Redpath led Scotland to a historic win, helped in part by the home team’s poor discipline, giving away 15 penalties. Finn Russell, who hasn’t played for the national side in over a year due to conflict with the coach Gregor Townsend, also shone, despite being sin binned for a trip on Ben Youngs.

Scotland saw the majority of possession, managing to keep some of England’s best attacking threats, Jonny May and Ollie Lawrence, silent for most of the match. Eddie Jones’ game plan is often to play very defensively, though when in attack England never looked too threatening, Farrell often giving the ball away with an overzealous kick to the wingers.

France’s bonus point win leaves them at the top of the table, though Ireland and Wales are still to play on Sunday afternoon. 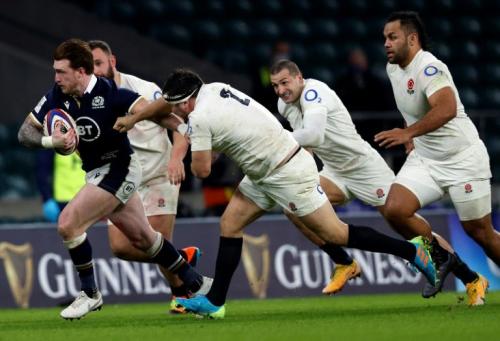 Stuart Hogg gets through the England defence
Sport