The story of Dante's other women 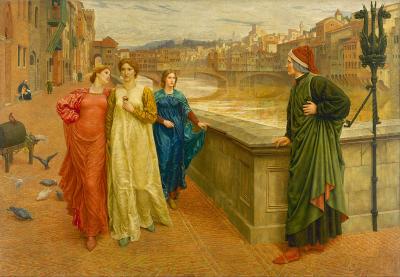 ROME - For centuries, the woman most associated with Dante was Beatrice, considered his muse and one true love. However, according to a new book by Marco Santagata, there were other women with whom Dante had a much closer relationship.

Santagata, who died last November, was an academic and writer who dedicated his life to the study of Dante, Petrarch and Boccaccio, among others, and wrote many books, both fiction and non-fiction on their lives and work.

‘Le Donne di Dante’, published posthumously by Il Mulino, discusses the other women in his life, most notably Tana and Gemma, his sister and wife, though many others who had an impact on his poetry are also mentioned. Beatrice, whom Dante most likely met only a handful of times in his life, is thought by some to be more of a poetic inspiration than an actual love, though she clearly did have some great effect on him.

Dante’s engagement to Gemma Donati was arranged when he was around 11, though they weren’t married until his early 20s. Very little is known about her, and she is never mentioned in his poetry, though a few of her relatives are.

Dante’s sister Tana was a great moral and financial support for him, though she never got much poetic appreciation from him, with women he barely knew such as Francesca di Rimini having a greater part in his poetry. In fact, as Santagata discusses, both Tana’s husband and Gemma’s family were very financially kind to Dante.

Santagata’s book tells the story of Dante’s life through all the women he knew, at times perhaps in contrast to the more poetic version Dante told.