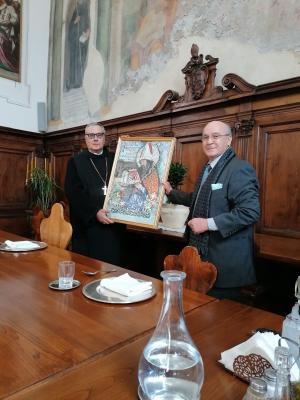 ROME - Responding to an invitation from Father Abbot Dom Mauro Meacci, Abbot of the Benedictine Monastery of Subiaco and of Dr. Pierluigi Angelucci, former mayor of the city, the Ambassador of Algeria to Rome, Ahmed Boutache travelled to the municipality located 70 km away from the Italian capital. He was able to admire a monument full of history and faith dating back 16 centuries, a site that winks at history and which preserves priceless documents belonging to the great Algerian humanist Sant'Agostino, whose contribution to human thought was developed between the cities of Souk Ahras, his birthplace, and Annaba, the city of his long and fruitful reign as Archbishop.

The Algerian diplomat, who for the occasion was accompanied on Thursday by the Cultural Attaché, Dr. Hiba Fennouche, thanked Father Abbot Dom Mauro Meacci for this particular attention to his country and to one of its most illustrious thinkers and emphasised that the new Algeria is definitely committed to the path of ideas, to culture, to the authentic faith and the promotion of its rich history, marked by brilliant contributions to the development of universal civilisation.

And to add that "we are experiencing difficult times due to the protraction of the current pandemic, but despite all the restrictions, I wanted to be here today, to tell you that in the face of the destructive logic of hatred, together we can oppose an action of dialogue and mutual understanding.”

This, moreover, is the meaning of the Joint Declaration between the Grand Imam of Al-Azhar, Ahmed Al Tayeb and Pope Francis to which Algeria adheres with conviction; thus, the symbolic significance of my presence today among you, to try, in fact, together with you to build bridges rather than erect walls! And these seeds sown here and there will sooner or later bear good fruit for all of us.”

The Ambassador Boutache, during a short speech addressed to the monks of this prestigious monastery, also recalled that the restoration project of the Basilica of Sant'Agostino in Annaba was wanted and financed by Algeria, on the basis of an established principle that the Algerian Catholic Church is protected with all the rights due within the great national family, more than ever proud of its rich history and its resolutely inclusive path.

The author of Confessions and the City of God, he added, is now part of a common and shared heritage and embodies this Mediterranean to which we all aspire, a space for encounter and dialogue.

Finally, recalling that the conferences on Saint Augustine that took place in Algeria, bringing together the most prestigious experts, were the result of an approach that draws its strength from the desire of our people to proudly claim a thousand-year past and from the commitment of the government of making every effort to highlight this rich Algerian specificity. 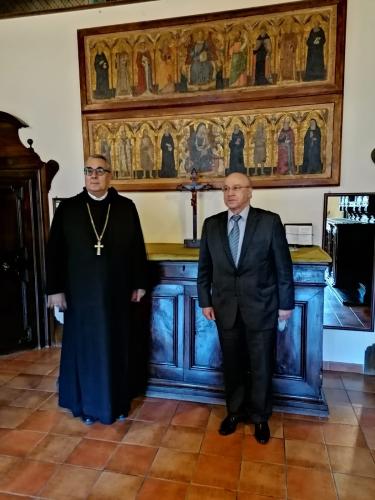