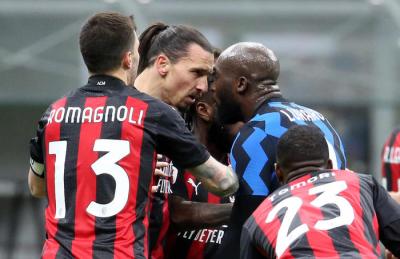 MILAN - A heated exchange between Zlatan Ibrahimovic and Romelu Lukaku one of many incidents in a fiery encounter between the Milanese clubs in the quarter-final of the Coppa Italia on Tuesday night, which saw Inter’s 2-1 victory guarantee their place in the semi-finals.

At the end of the first half, with tensions already high, Sweden’s Ibrahimovic said to his former Manchester United teammate, “go do your voodoo shit, little donkey”, in reference to claims that Lukaku’s Congolese mother, on a pilgrimage in Africa, had taken part in voodoo rituals. The Belgian responded by making comments about Ibrahimovic’s wife, before the two came head to head, and had to be separated by teammates. Both were shown a yellow card.

It was a busy day for the referee, with eight yellow cards shown in total, and a red for Ibrahimovic for a second yellow following a heavy tackle in the 58th minute. However, the refereeing duties were split after the starting referee Paolo Valeri, having injured his hamstring, was replaced by the fourth official Daniele Chiffi.

Ibrahimovic’s shot from just inside the box gave Milan the lead in the 31st minute, but a Lukaku penalty - given for a tackle on Barella by the Portuguese Rafael Leao - and a Christian Eriksen free kick in the 7th minute of added time ensured the victory for Inter.

Inter dominated huge swathes of the match, with Milan only managing 4 shots to Inter’s 28, and Inter having 68 per cent of the possession.

Inter are due to face either Juventus or Spal in the semi finals, depending on the result of Wednesday night’s match. 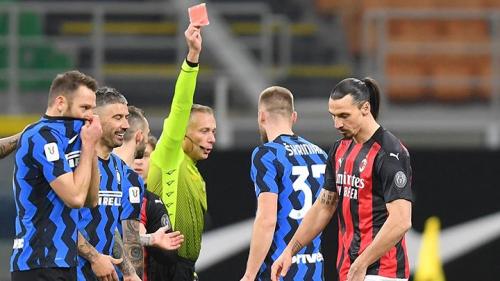