EGIC conference: Whither the Abraham Accords after Trump? 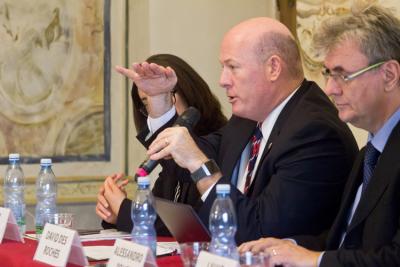 ROME - The legacy of the Abraham Accords rapprochement between Israel and the Gulf states brokered by the Trump administration may be to prevent Benjamin Netanyahu from taking more extreme anti-Palestinian measures demanded by the Israeli far right, a senior U.S. Department of Defense analyst says.

Speaking in a personal capacity at a webinar organised by the Euro-Gulf Information Centre (EGIC), David Des Roches also argued that the Biden administration will face an uphill struggle in mending nuclear fences with Iran, while French intransigence is likely to hamper improvements in U.S.-European relations within NATO despite the appointment of a new highly-experienced team of mandarins with extensive knowledge of Europe at the U.S. State Department.

Prof.Des Roches is an associate professor at the Near East South Asia Center for Security Studies, (part of the Defense Department). A former infantry officer, he wasdirector responsible for defence policy concerning the Gulf nations, Department of Defence Liaison to the Department of Homeland Security, senior country director for Pakistan and NATO operations director and deputy director for peacekeeping.

In the webinair anchored by Matthew Robinson of EGIC, Prof. Des Roches (DDR) discussed the Abraham Accords signed in August 2020, under which Bahrain and the UAE established full diplomatic relations with Israel.They are the first normalisation treaties between Israel and an Arab country since Jordan’s treaty with Israel in 1994. Prof. Des Roches consideredthe criticisms levelledat the accordsnoting thatTrump, like no president before, is a “rawshot test” who has caused  extreme reactions acrossthe political spectrum. Simplistic analysis by critics who consider Trump an itinerant huckster disregard the evidence that the accords were “revolutionary” and “not all self interest -- some of it may be pretty good,” said Prof. Des Roches.

The wide-ranging briefing and discussion were the first event organised by the Rome-based EGIC this year, enhancing its reputation as a leading think tank on the Middle East and the Arab World.

Themajor criticism of the Accords, the webinair heard,is that theyfurther solddown the riverthe stateless Palestinians who will continue to be marginalised by the Israelis under an effective apartheid regime, sounding the death knoll for a two-state solution- There has long been a consensus among most Arab countries that a peace deal with Israel would only come with the independence of Palestine. Israeli Prime Minister Benjamin Netanyahu seems now to be backing away from parts of the agreement to stop the annexation of more areas of the occupied West Bank, which was a key part of the deal for Crown Prince Mohammed bin Zayed Al Nahyan, the UAE ruler.

The dealarguably wentsome of the way to cooling tensions between Israel and a few Arab countries, and has increased trade and reduced regional isolation for Israel.Sudan followed in normalising ties with Israel in October and Morocco improved existing ties with Israel in December in return for Washington backing the kingdom’s claim to the disputed former Spanish colony of Western Sahara against the Algerian-backed Polisario Front.

the treaties likely could serve as a harbinger for further normalisation between Israel and Oman or the Saudis though some states such as Kuwait, which has hosted a large Palestinian refugee population as well as hardline Palestinians such as PLF leader Mohammed Abu Abbas, still have eschewed any rapprochement with the Jewish state.

A key player behind the accords was Republican donor Sheldon Adelson. Adelson, billionaire casino and newspaper magnate, as well as supporter of Netanyahu.He died Jan.11.

Other criticism has focussed on the “pay-off” Washington made to the UAE in terms of providing the Joint Strike Fighter and armed U.S. drones to the increasingly belligerent Arab nation active in Yemen and Libya.

Abu Dhabi already had been due to acquire the drones and speculation that the UAE also would acquire the US Navy’s sophisticated Growler EA6 Hornet came to nothing as the sheikhdom “did not meet the criteria,” said DDR. The UAE did get the joint strike fighter but “none of this stuff is being given it is being sold at top dollar,” while what Bahrain gets is unclear. “There was no explicit quid pro quo.”

Asked if the US naval base in Bahrain will be enhanced, DDR argued that while tehre may be some changes the naval facility there is little understood, being basically a command and control facility that easily could be moved while cultural “soft power” is at the heart of the U.S. relationship with the tiny island kingdom.

In Sudan due to a change of government the country was able to be taken off the U.S. list of terrorist states after paying compensation for terrorist acts. The United States also said it would intervene with the IMF so that loans to Sudan could go forward.

The timing of the accords less than two months before the US elections in November 2020 led them to beconsidered widely as“election fodder”, according to Prof. Des Roches. The timing caused political commentators to call it “not genuine peace” and just a rushed payoff job to give Trump’s administration an air of efficiency.

However, the 1978 Camp David Accords that led to the Egypt-Israel peace treatysigned by Sadat and Begin, which Prof. Des Roches called “the greatest diplomatic achievement of his lifetime,” faced similar criticism - that the deal was sped up by guarantees of increased US funding in the respective countries.Prof. Des Roches acknowledged thatthere was a definite increase in US donationsbutargued that this was just part of the deal.

After Camp David the Egyptians also were “paid off” with significant military assistance that continues today, he added, despite the “dismal Egyptian human rights record” and lacklustre security position. After the 1994 deal with Jordan Amman had dlrs 700 million in debt forgiven, mediation with Paris Club debtors by Washington on Jordan’s behalf, and a squadron of workhorse F-16 warplanes were given to Jordan as a direct pay-off.

“Critics of the Abraham accords” hence have disregarded precedents showing that such pay-offs “are to some extent standard operating procedure.”

Under the accords the UAE and Bahrain are termed “major strategic partners” of the United States, a phrase that “means nothing it is entirely status, but it is valuable like the ‘special relationship’ between the UK and the USA even if not enshrined in law.”

Prof. Des Roches didn’t much buy the criticism that the deal was “election fodder,” on the ground that American voters don’t care about foreign policy nearly as much as any of the other topics of pre-election debate. Jimmy Carter, he pointed out, having helped broker the Israel-Egypt peace treaty in 1979, subsequently lostthe 1980 presidential elections.

Looking to the future, Des Roches opinedthat under the Biden administration there willbe little interest in the Middle East, with most of the foreign policy action directed at the Mexico border.

While he expects the United States will rejoin the Paris Accords on climate change, recommitting with Tehran to the JCPOA nuclear deal will be a much harder nut to track with Tehran likely to demand a treaty and expected to insist that sanctions imposed since 2016 be lifted including those on Hezzbollah and the Houthis in Yemen, proposals that DDR considers “non starters.”

DDRtouched upon the impact of Brexit, saying that US-EU relations were likely to falter, given the role of Britain in the past as a “moderating influence” in the EU.

“You are getting a team here that is experienced. At least they know the channels and the levers to pull and they also know the limitations,” as seen during the 2019 confrontation between the West and Iran, he added.

Asked what could be the effect of the Abraham accords on the Israeli elections, Prof. Des Roches argued that “frankly the Trump administration got it right” on moving the US Embassy to Jerusalem and the accords also may turn out to be pivotal.

“If Netanyahu does something to further denigrate the status of the Palestinians” it could lead to major turbulence in Bahrain and Morocco where there are elements of a democratic system and also throw the possibility of Kuwait ever joining the accords out of the window, he added.

“Netanyahu is going to have to tread carefully. He has lost a lot of freedom of action,” Prof Des Roches told the EGIC webinair.