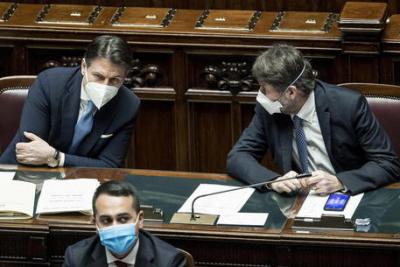 Conte (left) during the Chamber debate

ROME - Italian Prime Minister Giuseppe Conte has won his second vote of confidence in as many days as the results of the Senate vote keep his coalition government in power.

Having won the vote of confidence in the Chamber on Deputies on Monday night, Tuesday night saw Conte manage to hold his majority in the Senate as well. With the Italia Viva party, whose defection from the majority coalition caused this vote of confidence, absenting from the vote, the votes came to 156 for Conte, 140 against and 16 in total absenting, Though Conte was six votes short of an absolute majority, he holds on to government.

Two senators of the Forza Italia party, members of the opposition, voted in favour of Conte’s government, and were promptly expelled from the party, with three crucial votes also coming from three of the six life Senators. The announcement of the results to the Senate finally came at 10:45p.m. following a lengthy delay of procedural chaos while the questori of the Senate decided whether or not to grant the request of former M5S Senator Lello Ciampolillo, and one other, to vote late. They were cast their votes later, which were thought to maybe have been crucial.

In the first of the two votes of confidence for Conte’s coalition government, in the Chamber of Deputies on Monday night, the government won 321 votes in their favour, 259 against, with 27 deputies abstaining. The votes in Conte’s favour included five MPs who had previously defected from the 5 Star Movement (M5S), the largest party of the coalition, and Renata Polverini, a member of the opposition party Forza Italia.

This victory for the government has avoided the risk of re-elections or the dissolving of government in this time of national crisis.