“Terrone:” Today I am an engineer, poet, writer and journalist. However my life has been a long, interesting story. 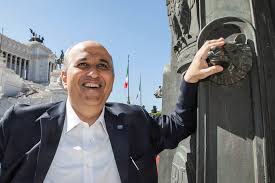 Francesco Terrone in fronf of the Vittoriano mounument in Rome

SALERNO – Many press articles have spoken about the story of my life and how I arrived in Lecco during the heyday of the Northern League led by Umberto Bossi, to whom I sent 501 green, white and red roses to underline the beauty of our national Italian flag, of our homeland and our people, inviting him to come to the South of Italy. After graduating with brilliant honors in mechanical engineering in March 1991 at the Frederico II University of Naples I went to the northern city and was rejected in my first job applications because of my surname, Terrone to be exact, and because of my southern origins, hailing from the Piazza Galdo neighborhood of Mercato San Severino in Salerno province.

Disappointed and frustrated by this experience of vexations by some entrepreneurs, I planned a real challenge – to create jobs in my town of origin giving work to my fellow townsfolk and young people there.  I progressed from being an engineer to also being an entrepreneur, creating Sidelmed spa, a company for inspection and certification with its headquarters in the more than 100-year-old house where my grandparents were born, but with operational branches all over Italy – in Naples, Rome and Milan, to name but a few of them. In its business strategy, my company never used any state financing or grant.

My life story has been told also by eminent authors, including Giorgio Calcagno, who dedicated several pages to me in his book “L’identità degli italiani” (The Italians’ Identity).  Aldo Forbice for his part wrote “Il viaggio dell’ingegner Terrone-Il pericoloso percorso di un coraggioso imprenditore del Sud” (The Journey of Engineer Terrone .. the dangerous path of a courageous entrepreneur from the South), which was published in three editions by Guerini e Associati and was warmly received.

I like to bear witness to my story, not from mere narcissism, but because it is symbolic in so far as it describes well the life of an ordinary Italian citizen, indeed of a citizen of the southern Mezzogiorno who despite bullying and dirty tricks, was able to make it with determination and digntity. I like to say that “I don’t want to be a star. I want to honour my land.”

My message, therefore, is for young people today, espeically those of our Italian South.

I urge them to grit their teeth, especially in this difficult period. Notwithstanding everything, even the health and social tragedy spawned by Covid, our politicians – I am talking about the Mayor of Naples, De Magistris, to whom I gave one of my most beautiful lyrics entitled ‘Napoli,’ and the Campania regional governor De Luca – have shown themselves capable of managing a hitherto totally unknown emergency, despite mud continuing to be slung at our South by a North that wants to make people believe to be ever more capable to organize, manage and administer. What I really feel like telling our politicians is that in this dramatic period we must join forces, speak little, squabble less and act for the common good.

It is possible to go forward and become great, even in the South, which has been and will always remain alive in a vison of not just national but also European integration.

I conclude with a thought reaching out to poetry, my life companion, which gives me great satisfaction both in Italy and abroad. Taking a breath that seems to suspend the words I have the strength to say that poetry allows me to arrive where I can’t reach with numbers, tightening everything and everyone in one big embrace. 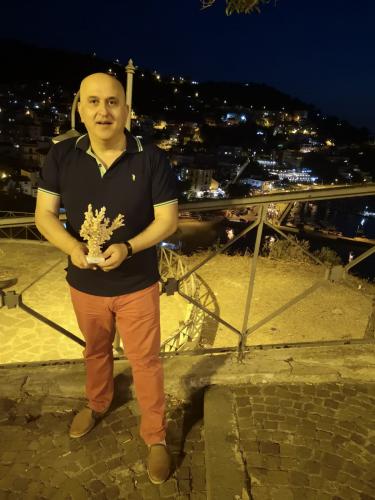