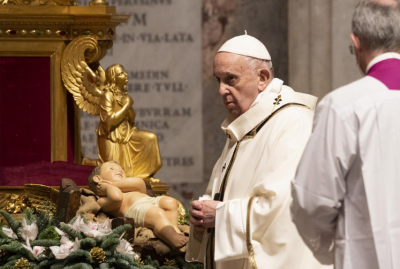 VATICAN CITY -- Pope Francis in his Christmas Day Urbi et Orbi (to the city and the world) message recalled that too many children, especially in Syria, Iraq and Yemen, "still pay the high price of war," calling once again for tensions to be eased in the Middle East and eastern Mediterranean.

"On this day, when the word of God became a child, let us turn our gaze to the many, all too many, children worldwide, especially in Syria, Iraq and Yemen, who still pay the high price of war," the pontiff said.

"May their faces touch the consciences of all men and women of good will, so that the causes of conflicts can be addressed and courageous efforts can be made to build a future of peace.   May this be a favourable time to ease tensions throughout the Middle East and in the Eastern Mediterranean.   May the Infant Jesus heal the wounds of the beloved Syrian people, who for a decade have been  devastated  by  war  and its consequences,  now  aggravated  by  the pandemic.    May  he  bring comfort to the Iraqi people and to all those involved in the work of reconciliation, and particularly to the Yazidis, sorely tried by these last years of war.  May he bring peace to Libya and enable the new phase of the negotiations in course to end all forms of hostility in the country."
Francis continued:  "May the Babe of Bethlehem grant the gift of fraternity to the land that witnessed his birth.  May Israelis and Palestinians regain mutual trust and seek a just and lasting peace through a direct dialogue  capable of  ending  violence  and  overcoming endemic  grievances,  and  thus  bear  witness before the world to the beauty of fraternity.   May the star that shone brightly on Christmas night offer guidance and encouragement to the Lebanese people, so that, with the support of the international community, they may not lose hope amid the difficulties they currently face."
"May the Prince of Peace help the country’s leaders to lay aside partial interests and commit themselves with seriousness, honesty and transparency to enabling Lebanon to undertake a process of reform and to persevere in its vocation of freedom and peaceful coexistence.   May the Son of the Most High sustain the commitment of the international community and the countries involved to continue the ceasefire in Nagorno-Karabakh, as well as in the eastern regions of Ukraine, and to foster dialogue as the sole path to peace and reconciliation. "
" May the Divine Child alleviate the suffering of the peoples of Burkina Faso, Mali and Niger, affected by a grave humanitarian crisis caused by extremism and armed conflicts, but also by the pandemic and other natural disasters.  May he end the violence in Ethiopia, where many people have been forced to flee because of the fighting; comfort the inhabitants of the Cabo Delgado region in northern Mozambique, victims of the violence of international terrorism; and encourage the leaders of  South  Sudan,  Nigeria  and  Cameroon  to  pursue  the  path  of  fraternity  and  dialogue  they  have undertaken. "
"May  the  Eternal  Word  of  the  Father  be  a  source  of  hope  for  the  American  continent, particularly  affected  by  the  coronavirus,  which  has  intensified  its  many  sufferings,  frequently aggravated by the effects of corruption and drug trafficking.  May he help to ease the recent social tensions in Chile and end the sufferings of the people of Venezuela."
"May the King of Heaven protect all victims of natural disasters in Southeast Asia, especially in  the  Philippines  and  Vietnam,  where  numerous  storms  have  caused  flooding,  with  devastating repercussions on families in terms of loss of life, harm to the environment and consequences for local economies.   As I think of Asia, I cannot forget the Rohingya people: may Jesus, who was born poor among the poor, bring them hope amid their sufferings."
"Dear brothers and sisters,   “To us a child is born” (Is 9:6).  He came to save us!  He tells us that pain and evil are not the final word.  To become resigned to violence and injustice would be to reject the joy and hope of Christmas."
"On this festive day,  I  think  in  a  special way of all those  who  refuse  to let themselves be overcome by adversity, but instead work to bring hope, comfort and help to those who suffer and those who are alone.   Jesus was born in a stable, but was embraced by the love of the Virgin Mary and Saint Joseph.  By his birth in the flesh, the Son of God consecrated familial love.  My thoughts at this moment turn to families: to those who cannot come together today and to those forced to remain at home.  May Christmas be an opportunity for all of us to rediscover the family as a cradle of life and faith, a place of acceptance and love, dialogue, forgiveness," the pope said.
World
Vatican