Comment: The disgusting visit of the Italian delegation to Azerbaijan 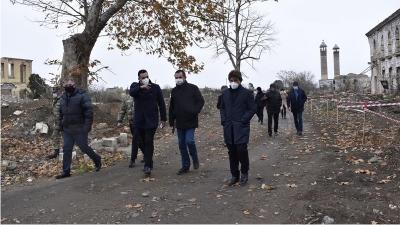 ROME – Those who seek to cover up Azerbaijani and Turkish crimes in Artsakh and Armenia cannot camouflage themselves within the Armenian community. Italian and European politicians have betrayed the just Armenian cause - and this is not the first time - confident that they can equally count on the votes of the Armenian community itself, while winking at the centuries-old enemy.

A part of the responsibility, however, must also be acknowledged by the huge affluent Armenian Community in the world, possessing great cultural and literary skills, the most distinguished in the world, but does not seem to be able to have a say with politicians. Europeans, often ignorant of the details of the complicated Armenia-Azerbaijan question, are engaged in foreign policy over a plate of pasta and a glass of wine. We have all witnessed the war crimes committed by the Turkish-Azerbaijani alliance in Nagorno Karabakh where crimes such as extrajudicial executions, beheadings, poor treatment of prisoners and desecration of the corpses of Armenian soldiers and civilians were carried out – actions that require immediate intervention by the International Court of Justice in The Hague.

We have all seen beheadings carried out by a group of Azerbaijani soldiers, holding to the ground a man who tries free himself while a third soldier, with the Azerbaijani flag and other military insignia on his uniform, slashes his throat with a knife. At the end of the execution, there is also applause and the cheers of celebration.

In all this, what does democratic Italy do for the Armenian population and for Artsakh? Reward the assassins. Only a few days after the latest massacre against the Armenians did the visits of the Italian delegations to Azerbaijan start. After that of the parliamentarians carried out between Nagorno Karabakh and the Azerbaijani capital, Baku, it was the turn of the Undersecretary for Foreign Affairs, Manlio Di Stefano. In this way, Italy can boast the title of the first Western country to visit Baku, first with a parliamentary delegation, then with a representative of the government. Subsequently, the delegations visited the territories occupied by Azerbaijan in Nagorno Karabakh, giving Italy an unenviable second honour: the first country, after Turkey, to pay homage to criminals, underlining: "The country that hosts us is our top oil supplier, this is where the tap starts.” Forgetting that the expansionist policy of Erdogan and Aliyev's aggression risks transforming the South Caucasus region into an utter hell, with worldwide consequences. In fact, the Turkish and Azerbaijani press immediately exploited the Italian visits in their relentless propaganda. With these disgusting missions, Italy shows that it does not give due attention to relations with a young democracy like Armenia, and to placing everything on an equal footing with a country where the absolutist ideology of Stalin's children still exists. Political representatives perhaps too ignorant or opportunistic to understand that the ancient Armenian region of Artsakh is the territory where Christianity first took root.

"If this conflict goes beyond a local scale, it is because of the commitment and the massive and decisive participation of Erdogan’s Turkey, in the name of a neo-Ottoman and national-Islamist expansionist policy. And it is a threat, in Artsakh, Azerbaijan and Armenia as elsewhere in the world, against peace, and against international interests,” said the Commission of the French Foreign Ministry. The situation is of great concern, not as they believe or pretend to believe, the members of the Italian delegation that honoured the dictator Aliyev. The Armenian community, and lovers of peace all over the world, must understand that there is a risk that the millennial Armenian presence in Artsakh will be wiped out, as in Turkey after the genocide committed by the Ottoman Turks from 1915 to 1923.

Of course, sooner or later a Resistance against the invader will be reborn, as history teaches us, but a Resistance that will need every political, financial, moral and practical support. The Armenian community in the world and in Italy is large, and must measure its support for Armenia. There are much smaller communities that get a lot in return for their vote. It is one of the many tricks of politics, of which the members of the Italian delegation that arrived in Baku on Dec. 5 (vice-president of the Chamber, Ettore Rosato; senators Maria Rizzotti, Alessandro Alfieri, Gianluca Ferrara and Adolfo Urso; deputies Rossana Boldi and Pino Cabras) are one of the most reprehensible displays.

Talal Khrais is the Rome correspondent for the Lebanese national news agency.