Turkey cosies up to Italy as EU threatens sanctions 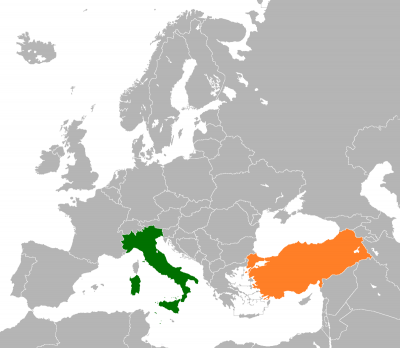 ANKARA – As the world continues its fight against the COVID-19 pandemic and the global economy faces insurmountable economic headwinds, it is natural that Turkey would look to enduring partners, especially in crucial and critical times in areas like economic investment.

This analysis makes it abundantly clear that when it comes to investment, Turkey has no stronger or more reliable partner than Italy in Europe. Total two-way investment is expected to increase from dlrs. 20 billion to dlrs. 30 billion.

Accordingly, Turkish Trade Minister Ruhsar Pekcan emphasized this intention during her speech at the Joint Economic and Trade Committee (JETCO) meeting where the second term protocol was inked between the two countries on Thursday. The meeting was held virtually this year due to the outbreak of coronavirus, with the participation of Italian Foreign Affairs Minister Luigi Di Maio and various company representatives.

As for Turkey's relations with the EU, there has been a degree of tension owing to the prospect of sanctions stemming from a row with Greece over energy resources and maritime borders. During the Council of the European Union's meeting on Friday, the EU postponed potential sanction decisions for Turkey such as an arms embargo and trade tariffs until they seek the opinion of the upcoming Biden administration.

It was a disappointment for countries such as Greece and France, which had pressed for more urgent action to express EU disapproval of Turkish foreign policy.

The Turkish Ministry of Foreign Affairs made a written statement thereafter: "We reject the biased and unlawful attitude toward [North] Cyprus, eastern Mediterranean, Aegean and regional issues in particular, which we know that the majority of the EU does not adopt, but had to be put into the Dec. 10 EU Summit Conclusions due to solidarity and veto pressure.”

At a time when Turkey faces such problems in its relations with the EU, Italy confirms itself to be a valuable partner once again. Apart from economic cooperation, Italian foreign policy experts, stressed that sanctions would put dialogue at risk between the EU and Turkey. Similarly, former Italian Ambassador to Ankara Carlo Marsili told Anadolu Agency, "I have doubts that the sanctions would harm the interests of Europe." He also stated that Italy is not in favour of sanctions, adding that EU Term President Germany is also not supporting any sanctions decision.

Such a display of support in the current circumstances plays a role in getting the two nations together and mollify some of the baseless anti-Turkey bias in the region.

Italy is Turkey’s second-largest trade partner among European Union members, while it stands among the top five worldwide. What cannot be quantified and shouldn’t be understated is the significant business nous and dialogue between these countries as a result of this partnership.

Overall, from a realistic perspective, since the business complementarities are added values for the countries, it is most likely that, two middleweights like Turkey and Italy can achieve their goals of expansionism and preserve their own interests through solid cooperation.