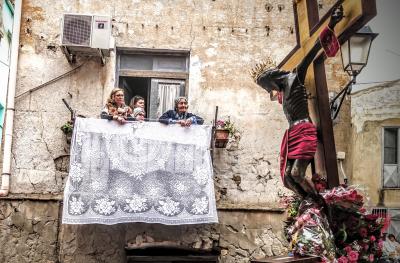 ROME – When residents of the southern Italian town of Siculiana saw a preview screening of A Black Jesus – the new documentary that casts them in the spotlight – they “cried like babies.”

That is not because they were unhappy with the way they were portrayed, the film’s director and cinematographer Luca Lucchesi tells Italian Insider.

This year, for the first time in the history of the small Sicilian village in the province of Agrigento, the annual religious procession involving the black Christ statue could not go ahead.

Like many other events in 2020, it was a casualty of the novel coronavirus.

“[It] was the height of the lockdown in Italy, so for them watching it, I think it was twice as emotional,” Lucchesi says.

Every other year, Siculianesi emigrants from Italy and abroad have flocked back to their hometown especially for the venerable May 3 procession of the Holy Cross of Siculiana.

Set against the milieu of Italy’s refugee crisis, A Black Jesus opens with two migrants walking along the beach trying to make sense of the paradoxical attitudes of the locals.

“In this town there is a statue of a black Jesus,” one tells the other. “The funny thing is that the locals don’t like the black people, but they love this black Jesus.”

The documentary has a feature film feel thanks to its CinemaScope format and Lucchesi’s cinematography, which captures Siculiana’s natural beauty and ancient spirit.

When Lucchesi originally approached the locals with the project, they were immediately excited about the prospect of luring hoards of tourists to their tiny town.

But Lucchesi had a different mindset.

“I’m not going to make a film for tourists. After the film, you will not have thousands of tourists coming here,” he told the villagers.

Not only did the filmmaker aim to lay bare the feelings and attitudes of the townsfolk toward the African migrants with whom they shared an uneasy co-existence, but also to present the issue in a balanced way, without judgment.

“I think that they understood there’s not one second of judging in the film. It’s really a pure observation of one year in a small town,” Lucchesi says.

The director has been living in Germany for 12 years. During that time he has built a close association with German filmmaker Wim Wenders of Buena Vista Social Club fame, who lent his support as a producer.

The idea for A Black Jesus was born when Lucchesi, who grew up in Siculiana, returned to his hometown after his father’s death in 2017.

Given his ties with the town, it didn’t take long to gain the locals’ trust.

“Slowly but surely it happened … I spent a lot of time there and, after a while, I was really the guy with the camera that could go anywhere,” he says.

But he was also mindful that the appearance of a camera could influence the behaviour of his subjects.

“That’s why we always shoot for a long time, because at the beginning the first approaches with a scene or with a character are always kind of fake to me or for the viewer,” he says. “After a while, when people forget about you, then it becomes real … and what’s in the film are really just those true moments.

“But for sure, in the process my presence changed not only the people in front of the camera but the whole story, I think. Being there somehow [influenced] unconscious change in the decision making of each one of the inhabitants.”

During the 18-month shoot, people not only became comfortable in his company, but it also forced them to re-evaluate their own decisions and attitudes, Lucchesi says.

“And that also was partly my hope … I was not interested in making a film to just collect information. I’m not a journalist,” he says. “I’m more interested in change.”

Filming began shortly before the leader of the right-wing League party Matteo Salvini had became Interior Minister. During his 2017 electoral campaign Salvini, who had entered Siculiana’s refugee centre and recorded images with his iPhone, claimed the centre was dangerous and that it was causing the people of the town to suffer, Lucchesi recalls.

“I wanted to show people how it really is … and let people know that everything’s not black and white,” Lucchesi says. “[I] like to challenge this vision of reality.”

In some ways, those living in Italy’s poorer south, who can often be looked down upon by the northerners, share similar issues facing the immigrants.

“They are both an expression of poverty and disruption, and the failures of a system,” Lucchesi says.

“If you live in this situation, on both sides, for such a long period of time, then you forget that actually, you are fighting the wrong enemy. They should fight the real enemy, which is the system.”

The film had its world premiere at DOK Leipzig in Germany on Oct. 28 and opens in Italy at the Efebo D’Oro Film Festival in Palermo, which runs from Nov. 29 to Dec. 12. 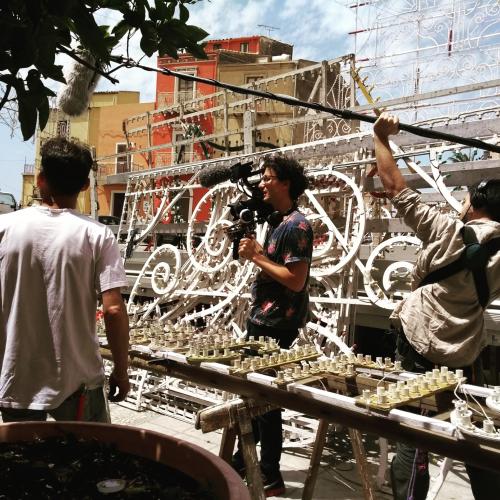