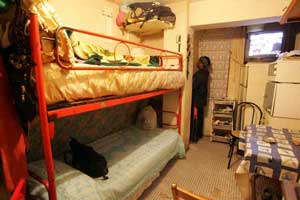 ROME –Tens of thousands of struggling migrants, many providing services for tourists in the Eternal City, live in squalid windowless basements, some rented by landlords linked to the Vatican bank, housing association activists say.

Hidden amid Rome’s glittering arts and swanky residences of its notoriously rich politicians, in restaurant kitchens young men prepare one meal after the other. At dawn, when the partying is over, herds of middle-aged women enter hotels via the back door. Who are these people? Why do they disappear after work? Where do they live?

Via Cassia, "chilometro zero." From Ponte Milvio on, the road meanders up hill and down dale. Exclusive villas and condominiums alternate on both sides of the road. The balconies are lavishly decorated with flowers and tropical plants. Many offer a splendid view on the Veio nature reserve park. Expensive cars passing through automated gates reveal trimmed gardens and swimming pools. Meanwhile, CCTV cameras monitor every movement.

The sister of the President lives here. A leader of a political party used to live here. In the local supermarket one can spot television celebrities, famous actors and models.

Hidden in private or dead-end streets, isolated blocks of flats contrast with the villas. The buildings carry names like "residence" and "fabbricato." Cracks in the concrete are visible under the peeling paint. Here, the balconies are either pitched with tents or packed with furniture and other belongings.

Three accountants, Aldo Sanchini, Vittorio Silvestrini and Giancarlo Muci own several apartments in Via Gradoli 96. All three are board members of the real estate branch of the Vatican Bank. Rome swarms with companies managed by professionals who hold large property portfolios on behalf of influential third parties.

In squares in front of the buildings, people cook in the open. The smell of food is pervasive. Shattered beer bottles lay everywhere.

Satellite dishes indicate the presence of overseas immigrants. Almost every letter box carries a foreign name. At any time of the day, a dozen languages sound from the open doors and windows. Loud music is playing: Latin rhythms clash with oriental tunes.

Italian flags mark the few apartments that are occupied by locals. With its harsh stance on immigration, mayor Gianni Alemanno ‘s party collected more than half of the votes of this locality during the latest municipal elections.

On a parking lot the charred carcass of a motorcycle is rusting away. Used heroin needles litter the pavement. An improvised path reveals construction debris and the parking lot masks a former garbage belt.

The inside of the buildings is a Hidden City: an Escher-esque labyrinth of stairs and dark, narrow corridors. Cave storage rooms have been transformed into tiny basement apartments.

The dwellings do not look as though they would comply with any building regulation or safety requirement.
Tapped electric wires run through the corridors. Black stains on the walls indicate high levels of mould. There have been several reports of tuberculosis in the area.

Many lodgings do not have a single window. Those inside the building are right above the garage forcing their residents to inhale car emissions. The residents of the exterior basements simply have to inhale the return air of the air-conditioning.

The rent of a room exceeds an immigrant's wage, with some rooms rented at 450 euros per month. Up to four people share a room as small as thirteen and a half square metres. Entire families have to live in one room. Every square metre is precious: mattresses are laid one next to the other; furniture and laundry are put in the corridor. To extend the habitable surface, the lodgers cobble together mezzanines.

With a rather morbid sense of humour Italians call these lodgings "loculi," i.e. Columbarium niches. The lodgers use gas cylinders for cooking and heating, thereby turning the rooms into time bombs waiting to explode. People have been buried alive in these rooms following gas explosions and fires.

The lodgers try to improve their situation. But differences in ethnical background, legal status, work schedule and a complex subletting system hinder brotherhood. These blocks of flats are modern Towers of Babel.

The buildings are conveniently close to the villas. In this way the rich have their servants within arm's reach. While most immigrants sell their skills, some sell drugs, others just sell their body. Italians who visit these buildings wear sunglasses so as to not be recognised. They all look anxiously for specific doors: in the cave apartments exotic prostitutes work 24/7.

Native residents, however, protest. These Italians do not exploit immigrants. Together, they form committees, the most active of which is "Vigna Clara." For decades they have been addressing the issue to the local community council. Apparently they are barking up the wrong tree.

As well as Vatican bank officials, several buildings are owned by engineer Giuseppe Callarà. His grandson, Paulo Callarà, sits in the local community council. In one building on Via Mastrigli, where the "ingegnere" transformed twenty apartments into two hundred "loculi," gas explosions have caused casualties and several people died in Callarà’s building on Via Pieve di Cadore which contains 130 apartments.

In the same building owned by the three Vatican real estate board members, an apartment that was central to a blackmail scandal involving the then President of the Lazio region, Piero Marrazzo, and a Brazilian prostitute turned out to be jointly owned by two politicians linked to the mayor, Alberto Todini and Giannantonio Cuomo, one of whom heads Roma Entrate, the public entity for investigating tax fraud. Yet, like all slum landlords in the area, he insisted on rent paid cash in hand. The mayor's party talks the talk, but does it walk the walk?

When community protests make front-page news, the official forces inspect these buildings and draw up a report. But while lodgers become homeless, the owners are hardly ever prosecuted. Does it come as a surprise that late police commander Vincenzo Parisi owned a number of properties in the area?

One theory states that towards the end of the Roman Empire nobody was willing to defend it any longer. The élite kept on importing foreigners from all over the territory in order to keep wages low and rents high. In Rome, while the happy few lived in splendour, life was a nightmare to most of the inhabitants.
Once a vast building site in which slaves erected monuments, mass tourism has turned the city of Rome into an immense sweatshop in which immigrants serve well-off citizens and tourists. "Nihil novi sub sole?" 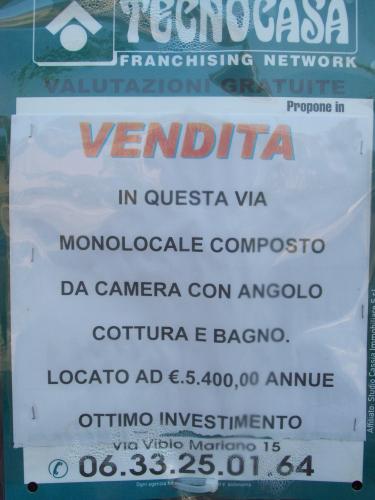 One room with kitchen corner and bathroom, 5,400 euros per year (450 euros per month). A great investment.
Rome
Vatican