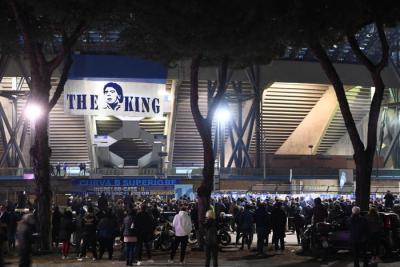 NAPLES – Thousands of grieving Neapolitans poured out into the city’s streets to honour the memory of Argentine soccer hero Diego Armando Maradona, who led Napoli to two Serie A titles – in 1987 and 1990 - as well as the 1989 UEFA Cup victory.

Napoli fans gathered in front of the Maradona mural in a square in the Spanish Quarter, lighting dozens of candles following news of his death.

A small bar in the square was projecting images of the goals scored by the soccer legend, who kicked a total of 115 for Napoli. There was none more famous than the winning goal scored in the November 1985 home clash against Juventus, then reigning European champions.

Maradona, who was released two weeks ago from a Buenos Aires hospital following brain surgery, died Wednesday of a heart attack, aged 60.

"Diego Armando Maradona, the greatest footballer of all time, has died,” Mayor of Naples, Luigi de Magistris, wrote in a tweet. “Diego made our people dream, he redeemed Naples with his genius. In 2017 he became our honorary citizen. Diego, Neapolitan and Argentine, you gave us joy and happiness! Naples loves you!”

Another famous Argentine, Pope Francis, honoured his fellow national with a prayer.

"The Pope is informed of Diego Maradona's death, he recalls with affection their encounters in recent years, and remembers him in prayer, as he has done in the days since he learned of his health condition," Vatican spokesperson Matteo Bruni said.

In his home country and beyond Maradona is known as “D10S,” a combination of the number 10 on the jersey he wore and the Spanish word for God.

But the image of the player, who was revered as a demigod on the field, was tarnished by off field controversy.

After catapulting Napoli’s soccer team to stardom, Maradona crashed into cocaine addiction as he knocked about with members of the powerful Neapolitan Camorra mafia organisation.

He made international headlines in the 1980s after a photo surfaced of the soccer star posing with sons of mafia boss Pio Vittorio Giuliano inside a huge shell-shaped bathtub.

“In Napoli, drugs were everywhere,” Maradona said. “They practically brought them to me on tray.”

According to The Independent, his “physical program” consisted of: a Serie A match on Sunday, followed by a continuous cocaine binge from Sunday night to Wednesday morning; from Wednesday morning to Saturday evening he would ‘cleanse,’ and sweat it all out; then repeat.

The Neapolitan years of women and cocaine took their toll, his ‘training’ regime leading to weight gain, bloatedness and a double chin.

Maradona’s first son, Diego Armando Maradona Sinagra, was born in Naples in 1986, although he only acknowledged paternity in 2004.

“Yes, he was also a controversial man,” de Magistris said. “But for us Maradona is the one who made Naples and Neapolitans dream — with his genius, his uniqueness, he gave us happiness. Many have named their sons Diego, for he was able to redeem a city that was often the target of prejudices and discrimination.”

“He opened Cuba’s doors to me when clinics in Argentina were slamming them shut because they didn’t want the death of Maradona on their hands,” he said.

So deep was his bond with Castro, that he even had the Cuban revolutionary leader's face tattooed on his left leg.

In 2016, speaking of Castro’s Nov. 25 death, Maradona said the blow was like a tennis ball to the chest.

“I wept uncontrollably,” Maradona said. “After my father, it’s the deepest sorrow I know.”