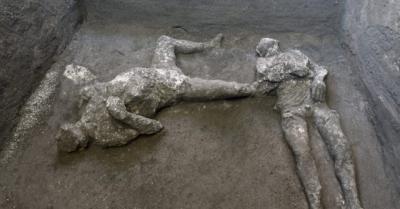 “It is impossible to see those deformed figures, and not feel moved. They have been dead for eighteen centuries, but they are human beings seen in their agony. This is not art, it is not imitation; these are their bones, the remains of their flesh and their clothes mixed with plaster, it is the pain of death that takes on body and form. Up to now temples, houses and other objects have been found that have aroused the curiosity of educated people, artists and archaeologists; but now you, my dear Fiorelli, have uncovered human pain, and every man feels it.”

POMPEII – What the writer Luigi Settembrini defined as “the pain of death that takes on body and form” once again takes shape in the excavations at Pompeii, in the form of men who lost their lives during the eruption, the traces of whose death throes have remained imprinted in the ash for two thousand years.

During the current excavations at Civita Giuliana, around 700 metres northwest of Pompeii, in the area of the large suburban villa where, in 2017 - thanks to a joint operation with the Carabinieri and the Public Prosecutor’s Office of Torre Annunziata aimed at stopping the illegal trafficking carried out by grave robbers - the servile part of the villa had been discovered along with the stable containing the remains of three harnessed horses, two skeletons of individuals caught in the fury of the eruption have been found.

Just as in the first excavation campaign when it was possible to crate plaster casts of the horses, today it has been possible to make casts of the two victims who were found near the cryptoporticus, in the noble part of the villa, which the latest investigations have focused on.

The bodies were found in a side room of the cryptoporticus, in the form of a passageway below the villa, which led to the upper floor.

This space, 2.2 metres wide but of a length which has yet to be determined, featured a wooden floor, as indicated by the presence of six holes in the walls for housing the beams which supported a gallery. The room was destroyed by the collapse of the highest parts of the masonry, beneath which was found a thick layer formed from the succession of pyroclastic currents that were typical of the eruption of AD 79.

Inside the room, initially voids were discovered in the layer of hardened ash, below which the skeletons were encountered. Once the bones had been analysed - by the physical anthropologist of the Park, who removed most of them - plaster was poured in, according to the famous plaster casting technique developed by Giuseppe Fiorelli, who first invented and experimented with it in 1867.

The plaster casts have yielded the shapes of the bodies of the two victims, in a supine position.

Both had died suddenly during the so-called second pyroclastic flow, which struck Pompeii and the surrounding area in the early hours of the Oct. 25, leading to the death of the survivors who were still present in the city and countryside. This second flow was preceded by a brief period of quiet, perhaps half an hour, during which the survivors both at Pompeii and probably at Civita left their dwellings in a vain attempt to save themselves.

The flow that struck was however very fast and very violent, bringing down the first floors of the houses and surprising the victims as they attempted to escape across a few centimetres of ash, leading to their deaths. In this case it is probable that the pyroclastic flow flooded the room through several openings, entombing them in the ash.

Studies revealed that the first victim, with his head tilted, and his teeth and skull visible, was a young man, between 18 and 25 years of age, who was approximately 156 centimetres tall. The presence of a series of vertebral compressions, unusual in a young man of his age, would suggest that he had carried out hard manual work. He could therefore have been a slave. He wore a short tunic, of which the imprint of the drapery is clearly visible on the lower part of the belly, with thick rich folds and traces of heavy fabric, of a consistency, which suggests that it was made of wool fibres. Several fragments of white plaster were found next to the face, and fragments of the wall preparation layer of the room were found alongside the legs.

The second victim was found in an attitude that was completely different to the first, but which is similar to that found in other plaster casts at Pompeii: the head has fallen backwards into the cinerite, at a lower level than the body, and the plaster cast has outlined the chin, lips and nose, while the skull is preserved. The arms are folded with the hands on the chest, similar to a position seen in other casts, whilst the legs are spread apart with the knees bent.

The robust stature of the victim, particularly in the thorax area, suggests once again that this is a man, though older than the other victim, aged between 30 and 40 years and approximately 162 centimetres tall.

This victim wore more intricate clothing compared to the other, as he wore a tunic and mantle. Beneath the victim’s neck and close to his sternum, where the fabric formed clear and heavy folds, imprints of the fabric are preserved that are clearly visible and indicate a woollen mantle which stopped at the left shoulder.

At the position of the upper left arm there is also an imprint of a different fabric pertaining to a tunic, which would seem to have extended to the pelvic area.  Fragments of white plaster were found close to the face of the victim, which had probably collapsed from the upper floor.

Roughly one metre east of the first victim, and 80 centimetres east of the second, other holes were discovered during excavation works. Here too, plaster was poured in, revealing the presence not of victims but of objects, which had perhaps been lost during the escape. Manual exploration of these ‘voids,’ and the shape revealed by the plaster casts, showed that these were heaps of cloth, with large and heavy folds; in particular the heap close to the first victim could be interpreted as a woollen mantle, which the young ‘slave’ had evidently taken with him during the escape.

THE CAUSES OF DEATH

As regards the cause and time of death, those elements that may give general indications are summarised below.

As is well known, the eruption began with a rain of pumice, which poured down upon Pompeii from the eruptive column from 1 p.m. on the first day of the eruption (probably Oct. 24) until about 7 a.m. the following day. The sedimentation of the so-called white pumice lasted for about 7 hours (from 1 to 8 p.m.); the sedimentation of grey pumice lasted about 11 hours (from 8 p.m. to 7 a.m. the following day). In total, the pumice fall phase lasted about 18-19 hours.

After the rain of pumice ceased due to the collapse of the eruptive column, the first pyroclastic flow occurred, reaching Pompeii during the final phase of the sedimentation of the grey pumice, so at about 7 a.m. on Oct. 25.

The other flows, starting with the second (which was more violent and energetic, and the cause of the greatest number of victims in Pompeii), followed one after the other throughout the early hours of the morning.

The first pyroclastic flow to reach Pompeii deposited only a few centimetres of ash and, due to its low energy, did not cause much structural damage. Most Pompeiians who survived the first phase of the eruption, no doubt survived this first flow as well.

The second pyroclastic flow was the most violent and energetic, capable of breaking down walls orientated at right angles to the direction of flow. The sediment deposited by this flow was a highly compact grey ash, well stratified and containing scattered pumice lapilli.

The deposits filling the room in which the two plaster casts were made at the site of Civita Giuliana are entirely represented by grey ash showing the same characteristics as the cinerite deposits within which most of the victims inside the walls of Pompeii were found (deposits from the second pyroclastic flow). It is likely that the pyroclastic flow entered the room at several points, engulfing the victims and burying them in ashes.

The thickness (at least 2 metres) is also consistent with the maximum thickness of this layer inside the buildings of Pompeii. The casts are embedded completely within the ash; hence the victims were killed and buried by the second pyroclastic flow that arrived in Pompeii.

At the moment it is impossible to say whether below this deposit there are further stratigraphic units relating to other phases of the eruption, or whether the ash rests directly on the bottom of the room (floor, stairs or ramp).  Continuation of the excavation will clarify the stratigraphy in detail.

THE ROOMS OF THE VILLA

Investigation of this area commenced in Jan. 2020 at the site of a large villa in Civita Giuliana, about 700 m northwest of Pompeii, where in recent years it had already proved possible to create the first cast of a horse in the servile area of the house, where the stable was being investigated.

On-going interventions have brought to light a series of rooms in the north-west residential part of the villa, in a panoramic location overlooking the Bay of Naples and arranged around a rectangular peristyle (colonnaded garden), delineated to the north and east by a portico, and along its western side by a cryptoporticus covered by a balustraded terrace.

Some of the rooms that were opened up here had already been explored in 1907-1908 and subsequently buried, whilst others had been the subject of illegal excavations.

In particular, three living rooms were unearthed; two cubicula diurna (bedrooms) with elegant cocciopesto floors featuring decorative stone tile motifs, and an oecus. This latter room corresponded to a large banqueting hall, with Third Style decorations and a floor with marble inserts (opus sectile) which was in the process of being renovated at the time of the eruption.  Below the terrace, as was usual in suburban villas of the Vesuvius area, there extended a cryptoporticus which served as a basis villae, known to be at least 56 metres long, which had been partially explored during the excavations of the early 1900s but in recent decades affected by illegal interventions. Here a beaten earth floor has been identified and, along the western side, a series of small windows splayed outwards.

In the northeast sector of this cryptoporticus, a vaulted opening was found that allowed access to the upper floor through a rectangular room, just north of the two cubicula diurna, where the bodies were found.

During the on-going investigations in the area, laser scanning surveys were carried out using the Leica RTC 360 terrestrial scanner, which were useful for documentation of the architectural partition and the archaeological stratigraphy when found.

This made it possible to construct an incremental three-dimensional Point Cloud model, which charts the various stages of the progressing work until it ends with the current state.

This survey was combined with one carried out some time ago to explore the tunnels, resulting in a correlation of data and an indication of the relationship between the whole length of the cryptoporticus and the excavated part of the villa.

In addition, when the voids left by the bodies were discovered, endoscopic analysis was undertaken along with the collection of samples of bone, and where possible, a laser scan was also made of the void left by the body, with the final stage being the creation of a plaster cast.