The Torlonia Marbles, a chequered history 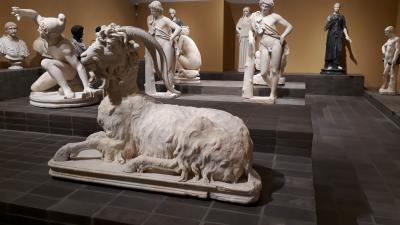 Goat with head by Gianlorenzo Bernini

ROME – Bad timing hit the eagerly awaited “Torlonia Marbles: Collecting Masterpieces” exhibition, forced to close due to pandemic restrictions only three weeks after it opened on Oct. 14. The exhibition, which organizers hope will reopen in December when restrictions should be eased, was the culmination, not only of meticulous logistic planning, but also of years of delicate negotiations on the part of Italy's Ministry of Art and Culture” (MIBACT) with the Torlonia Foundation. Hailed as the most prestigious private collection of ancient Roman sculpture in the world, it was, however, also known as “the most secret collection.” For over half a century, the unique cache of priceless antiquities was hidden away in a dark basement, after the Torlonia family heirs decided to convert their villa on the Via della Lungara into mini apartments and cleared out the 77 rooms of the museum that had been founded in 1875 by their ancestor, Prince Alessandro Torlonia.

The present exhibition contains 92 select pieces, chosen from among the 620 antiquities collected by the Torlonia family. Prince Alessandro created his personal museum in his palace by the Tiber in the year that Rome was proclaimed the capital of the Kingdom of Italy and his collection was visible (albeit to a select public) until the early years of last century when it vanished into its long period of obscurity.

The splendid Torlonia Marbles, however, were not forgotten. They had been immortalized and extolled by Grand Tour and Italian writers and art historians. Fortunately, Torlonia had documented his collection in a series of prestigious catalogues, published between 1876 and 1885, some of which in French and English. The edition of 1884/1885 was the first ever photographic catalogue of ancient sculpture to be produced. A massive tome, it is on display on a porphyry tabletop in the last room of the exhibition.

After much debate and negotiation, a suitable venue to display the Marbles was located on the Capitoline Hill in the long-abandoned Villa Caffarelli, part of which had housed the Mussolini Museum before the last war. The site, and its adjoining garden, required extensive restoration to be transformed into the Rome's newest exposition space, now known as I Musei Capitolini a Villa Caffarelli. The present layout, inspired by the 1884/85 Torlonia catalogue, was created by the Milan studio of David Chipperfield Architects. Cleaning and restoring the chosen exhibits was sponsored by the jeweller Nicola Bulgari, grandson of the founder of the luxury brand with an alleged passion for archaeology.

The collection has had a chequered history. Although it carries the Torlonia name, the first nucleus was actually created by Pope Clement XI's nephew, Cardinal Alessandro Albani. The enterprising Albani family hailed originally from Albania (hence the name) and made the leap from immigrants to naturalized Roman citizens and thence to the highest echelons of the papal state, all within the course of a couple of centuries. Cardinal Alessandro Albani was a passionate antiquarian, who organized archaeological digs and combed the Rome antique markets for prestigious pieces. He even built Villa Albani, a palace near the Porta Salaria, especially to house his many acquisitions. Unfortunately he became so carried away with his expensive hobby that he was unable to sustain it and had to let part of his precious collection go.

Villa Albani and contents were eventually purchased by the Torlonia, a wealthy banker family, who set up the new Torlonia Museum. Prince Alessandro Torlonia, too, was a passionate antiquarian with his own collection, culled from digs in the vast family estates, which included areas like the Villa dei Quintilli, the Villa of Maxentius and the Caffarelli park. In addition to the Albani marbles, he went on purchase the sculptures from the Via del Babuino studio of Bartolomeo Cavaceppi, a well-known sculptor and restorer and a protégé of Cardinal Albani.

“Collections of antiquities were the status symbols of the aristocracy from the second half of the 15th century till the end of the 19th century,” explains art historian and archaeologist Salvatore Settis, the exhibition curator partnered with fellow archaeologist and historian Carlo Gasparri.

The Torlonia collection expanded with the acquisition of the extensive collection compiled by the 17th century Marquis Vincenzo Giustiniani, the patron of Caravaggio. This included two Roman copies in the style of Praxiteles' 4th century BC “Resting Satyr” and the “Crouching Aphrodite” by 3rd century BC sculptor Doidalsas. as well as some dozen portrait busts of Roman emperors.

The Giustiniani collection also contains a life-size “Resting Goat.” The head was missing and it is believed that no lesser person than Gianlorenzo Bernini was hired to replace it, which he did, most successfully, judging by the result. The same thing happened to one of the “Crouching Aphrodites,” where a brand new head was allegedly made by Pietro Bernini, Gianlorenzo's father.

“Certainly, ideas of restoration were quite different to those of today. If a piece was missing, it was reconstructed. The owners wanted works that appeared perfect.”

In order to illustrate this, the exhibition contains a Hercules that guides have nicknamed “Frankenstein” as it is a pastiche composed of 112 fragments from different works in different eras. In this case, all the pieces are clearly visible – a deliberate decision taken to show visitors how much attitudes and restoration practices differ today from the times of the grand collectors of the past.

The exhibition ends at the Exedra of Marcus Aurelius in the Capitoline Museum, which is linked to the Villa Caffarelli through the garden. For the occasion, the Exedra also houses the collection of antique bronzes that Pope Sixtus IV donated to the Roman people in 1471, thus creating the beginnings of one of the first museums in the world. 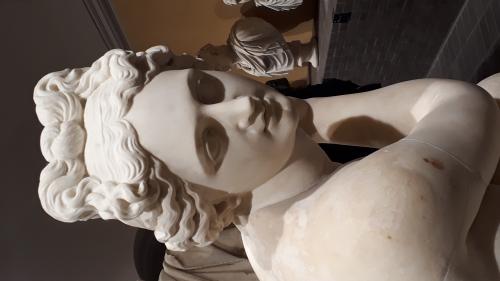 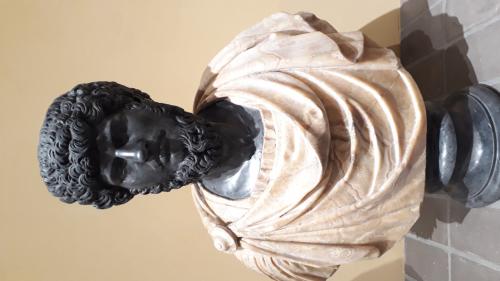