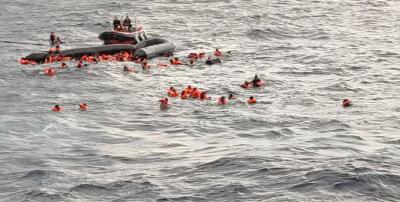 LIBYA – Six migrants are dead and some 110 have been rescued after an overcrowded dinghy bound for Europe capsized in the Mediterranean Sea off the Libyan coast, humanitarian sources said on Wednesday.

Two minors were among the migrants pulled from the water after a Frontex aircraft spotted the boat in the Libyan SAR zone and notified the Open Arms migrant rescue ship.

The NGO contacted the Rome Coast Guard to request an urgent medical evacuation for two minors, a pregnant woman and a young man.

“Despite the enormous efforts of the medical team, a 6-month-old girl passed away due to the shipwreck,” Open Arms Italy tweeted. “We had asked for an urgent evacuation for her and other serious cases, to be carried out shortly, but she couldn't wait.”

The tweet was later updated – “Correction - He was a little boy, his name was Joseph and he came from Guinea. R.I.P.”

CISOM doctors from the Italian island of Lampedusa were reaching the Open Arms at around 10 p.m., the Coast Guard said.