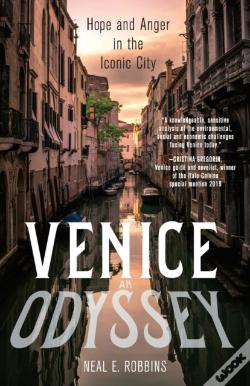 ROME – What are the hopes for Venice’s future? Neal Robbins’ book provides clues and also shows why its future is important.

After his recent re-election, Luigi Brugnaro, the extrovert businessman who is mayor of Venice, criticised those who live close to the lagoon for being too critical of his administration compared to those who live in Mestre and Marghera on the mainland. As approximately three-quarters of the electors live on the mainland, he is beholden to them. Most of those who want a renewed historic centre live in the ‘old’ city and so far have been subject to the mainland majority.

Neal Robbins tackles this problem directly, and many others, in his ‘Venice, an Odyssey.’ He is well qualified for the task. In 1971 a scholarship brought him from the USA to live with a Venetian family and finish his secondary schooling there. After decades as a journalist, in 2018 he returned to take a closer look at Venice. He connected with his Venetian ‘family,’ classmates, made new friends and interviewed over 150 Venetians about the changed city.

He made excursions to the lagoon islands but also to Mestre; visits to unfamiliar and familiar tourist sites such as St. Mark’s square, which he vivifies by providing nimble historical backgrounds, to the ghetto which is an example of preserving cultural identity, and to gondola makers who exemplify valuable but threatened artisan traditions. He recorded moods and food; talked with cleaning women and Donna Leon, who has created memorable Venetian characters in her novels, with fishermen and historians, with the archivist who found Marco Polo’s last will and testament, Mestre merchants and a pro-Brugnaro councillor as well as with many critical of him.

It makes for a rich mix, which runs the risk of being fragmentary and repetitive but most of the time he avoids such traps.

Immediately after the Second World War, historic Venice had three times as many inhabitants as today’s 52,000.  Is it a zombie city, dead although seeming to be alive?  It has long complained about 30 million tourists yearly but will it survive the Covid-induced lack of them? Many interviewed by Robbins stress the need for sustainable tourism and he shows the damage caused by an estimated 100 million visitors to St. Mark’s Basilica in the past 20 years, perhaps more than in all the preceding centuries. But there is little agreement on what would be sustainable tourism and how it can be achieved.

Venice has always given me a sense of expanding possibilities and the number of renewal-minded associations in the old city show many still believe in its future. The continuation of events such as its film festival and the architectural biennial indicate a determination to preserve its cultural initiatives.

Plans to convert housing formerly available for tourists to residences for the many university students who have fled to the mainland could foreshadow a Venice after mass tourism. Even the controversial Mose dam might prove worthwhile, staving off rising water levels which threaten Venice more than its slight subsidence.

In times of Covid all is uncertain. The odds seemed stacked against a worthy future for an old town, the majority of whose electors don’t live in it and don’t care about it. But this substantial book puts readers in touch with its most vital elements.