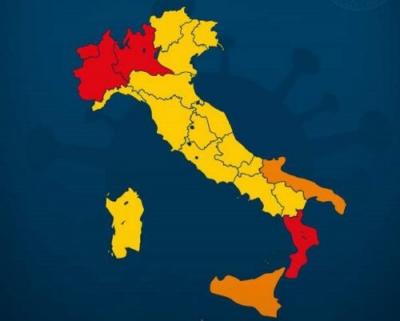 Prime Minister Giuseppe Conte Wednesday night announced the measures, which come into force from Nov. 6 to Dec. 3, as the country records 352 deaths in 24 hours, taking total fatalities to almost 40,000.

The new decree orders a nightly curfew from 10 p.m. to 5 a.m. and divides Italy into ‘red,’ ‘orange’ and ‘yellow’ zones according to contagion risk (Rt).

Fearing backlash from citizens in high-risk areas, regional governors have railed against the colour-coding system, favouring blanket rules across the country.

"I spent hours rereading the data, region by region, trying to understand how and why the government decided to use such different measures for very similar situations,” governor of Piedmont Alberto Cirio commented on social media. "I want the logic of these choices to be explained to me, I demand clarity from the Government," said Mr Cirio, who seeks clarity on why important choices were based "on data that are at least 10 days old" and "the net improvement of RT" was not considered.

In Lombardy, the measures have been described as a “slap in the face” to citizens.

"The requests made by the Lombardy Region have not even been taken into consideration. A slap in the face to Lombardy and all Lombards. A way of behaving that my people do not deserve," said the region's governor, Attilio Fontana, after Mr Conte declared it a red zone.

"I can only say that the system chosen by the government to define yellow, orange and red zones is too complex … it is based on RT and 21 indicators, very difficult to decipher." Mr Sala said. “I would have chosen a simpler and more uniform system.”

In Calabria, governor Nino Spirlì vows to challenge the region's classification as a red zone.

“This region doesn’t deserve an isolation that risks becoming fatal,” Mr Spirlì said. “The constant discussions I have had in recent days with the members of the government and with Commissioner Arcuri, beyond the great willingness to converse by all, have not produced any changes with respect to the evidently preconceived will to "close" a region whose epidemiological data, in fact, does not justify any lockdown, especially when compared with those of our companions in misfortune: Lombardy, Piedmont and Val d'Aosta."

Health Minister Robert Speranza is responsible for monitoring contagion risk and placing territories and regions in the appropriate category.

Currently, the high-risk ‘red’ zones are Lombardy, Piedmont, Calabria and Valle d'Aosta, while the medium risk ‘orange’ zones are Apulia and Sicily. The remaining regions fall under the safer ‘yellow’ coding.

Along with the 10 p.m. curfew, nationwide measures include the closure of cinemas, theatres and museums. Shopping malls will be closed at weekends and high schools, which had adopted a combination of face-to-face and online classes, will be required to switch to total distance learning.

Getting around on public transport will be even more challenging given the capacity will be reduced to 50 per cent. But smart working is being strongly ‘pushed’ for both public and private sector employees, to avoid overcrowding.

Additional restrictions will apply in the high-risk ‘red’ zones, in which a lockdown will be enforced. Measures to curb contagion include an order to stay at home and the banning of inter-regional travel. People leaving home for “proven needs,” such as work, health and urgent matters, will require a self-certification form. Bars, restaurants and shops within ‘red’ areas will close. Food outlets providing home deliveries and take away meals can continue to operate.

Inter-regional travel to and from the ‘orange’ zones is banned but movement within a municipality is allowed for “proven needs” with a self-certification form.

Also in orange areas, only home food delivery service and take away (up until 10 p.m.) are allowed.

In the ‘yellow’ regions ‘soft’ restrictive measures apply. Introduced last month, the rule ordering bars and restaurants to close at 6 p.m. remains. Travel from one yellow region to another is permitted, as is movement within the region you live. Movement after the 10 p.m. curfew is banned without a self-certification form and a valid reason.