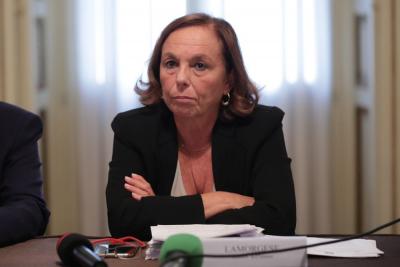 ROME – As protests against the latest anti-Covid measures continue to flare up across Italy, Interior Minister Luciana Larmorgese has warned that peaceful demonstrations were being infiltrated by violent groups.

“We are in a democratic state, the right to demonstrate must always be guaranteed to everyone,” Larmogese said. “But in this difficult moment for Covid 19, there are violent fringes trying to infiltrate the crowds to exploit the legitimate dissent of the economic categories most penalized by the crisis. This is why I appeal to all citizens who are demonstrating so that they clearly and publicly distance themselves from those who devastate the cities and violently attack the police forces.”

Police arrested 16 people in Piazza del Popolo after the demonstration that began peacefully ended in violence. Protestors overturned dumpsters and set them on fire. Scooters and biycles were also destroyed.

This follows demonstrations Monday night in northern Italy where some 2,5000 people took to the streets of Turin, police said.

Similar clashes were reported in Milan, where police fired tear gas to disperse crowds, taking 28 people in for questioning including 18 Italians and 10 foreigners.

In the south of the country, police, soldiers and journalists were attacked in protests that broke out last week in Naples and continued until Monday.

Smaller protests were held in other Italian cities including Genoa and Palermo, police said.

The growing unrest has prompted Italian Prime Minister Giuseppe Conte to threaten a full lockdown if people do not respect the rules.