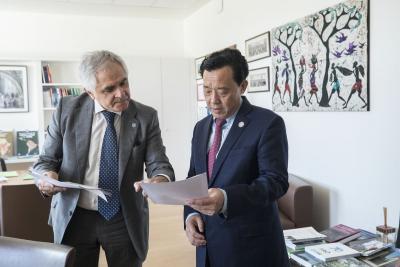 ROME -- The FAO former ADG Roberto Ridolfi evidently has had his contract terminated and left the UN agency amid concern over alleged conflicts of interests the former EU senior official was embroiled in while working on secondment from Brussels, FAO sources said Monday.

Signor Ridolfi  came under scrutiny from EU anti-corruption sleuths looking into the  self-described “father” of the European Union’s External Investment Plan, while he was on secondment last year to the UN Food and Agriculture Organisation and allegedly drummed up business for his sons at an EXCO cooperation fair organised by the Fiera di Roma, EU sources say.

Ridolfi left his post as a director at the European Commission’s development arm at the end of 2017, moving to a two year advisory role at the United Nations Food and Agriculture Organization (FAO). In 2019 he worked as an apri pista using his extensive contacts in Italian business to conjure up sponsorship for the EXCO cooperation fair in which a company managed by one of Ridolfi's sons, Sustainaway, claimed commissions for the business brought in by his father, as disclosed by the Italian Insider last year.

Ridolfi, an assistant director general at the FAO until September, and Fiera di Roma, both strongly denied any wrongdoing in the business dealings. But EU investigators started probing the affair to determine if there was a conflict of interest since RIdolfi still was an EU senior official at the time of the EXCO venture.
The future of Ridolfi and a number of other ADGs at the FAO has been in doubt for several months and told that their contracts might not be renewed at the end of this year. Ridolfi no longer is on the FAO organigram and evidently left the FAO last month.
EU investigators, who read of the affair in the Italian Insider, were subjecting relevant email correspondence including that between Mr Ridolfi and the head of the Fiera di Roma, Pietro Picinetti, to "deep analysis" to determine whether the Italian EU official, as he then was, could be  liable for "disciplinary or criminal proceedings" as a result of the dealings, a senior Brussels investigator told the Insider.
Ridolfi last year had been pushing hard, with support from the Italian foreign ministry, for promotion to become a Deputy Director General though in the event all DDGs remained in post for 2020.
Ridolfi began his career at the Fiera di Napoli and joined the European Commission in 1994. He was the EU’s ambassador in the Pacific region and then Uganda, where another of his sons has extensive business interests, before returning to Brussels in 2013.
As a director at the Commission’s development department, DEVCO, Ridolfi was responsible for setting up the EIP, in addition to about 200 staff and 2 billion euros ($2.47 billion) worth of development programs under the heading of “Planet and Prosperity.”
Devex described him as "a vocal advocate of blended finance -- Using public money to help make development-related investments more attractive to private investors."
Ridolfi told the European Parliament’s development committee in November 2017 that he felt like the plan’s “natural father ... who is now handing over to adoptive parents for the EIP to go further.”
jp
U.N.
Embassy Row