'Lady of the cardinal,' extradition process to begin 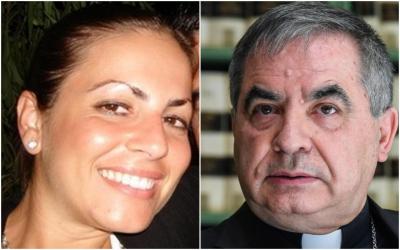 MILAN – Extradition proceedings are set to begin for the woman embroiled in the latest money scandal to rock the Vatican, judicial sources said on Thursday.

Cardinal Angelo Becciu, the former No. 2 in the Vatican secretariat of state, had allegedly wired 500,000 euros in Holy See funds to the 39-year-old woman’s Slovenian-based consulting firm under the pretext of humanitarian operations in Africa and Asia. But instead of paying informers and helping to free missionaries kidnapped by jihadists, almost half the funds were reportedly diverted into the purchase of high-end brand handbags, cosmetics and other luxury goods.

She allegedly gained the trust of the former deputy of the Secretariat of State in 2015 after contacting him via email.

Becciu maintains he was convinced the 500 thousand euros had been used by Marogna to finance the release of kidnapped missionaries.

The arrest took place almost three weeks after the embattled cardinal was forced to resign as prefect of the Congregation for the Causes of Saints amid a luxury London investment property scandal in which he was implicated.

Milan judicial authorities will decide whether to extradite Marogna to the Vatican City in coming weeks.

Many Vatican watchers are convinced that the Morogna scandal is only the beginning of a new chapter of Vatican scandals, according to La Repubblica.