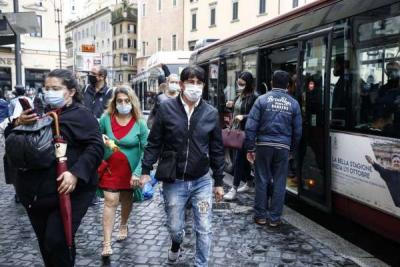 ROME – The next challenge in the war against soaring Covid numbers is Italy’s overcrowded public transport system, government officials said on Wednesday.

The country has seen a doubling of coronavirus cases in just seven days, going from 17,254 to 35,208 in the period from Oct. 7 to Oct. 13. That’s a rise in the average number of infections from 2,464 to 5,030 per day. The unprecedented spike in cases has experts concerned and looking for further ways to curb the spread.

Some regions have proposed distance learning for school children to limit crowds on buses and metro trains, but it is not appropriate in all geographical and social situations.

The centre-right governors of Liguria and Veneto, Giovanni Toti and Luca Zaia, respectively, have proposed making students in the fourth and fifth years of high school stay home and engage in online learning.

“If someone has the idea to close them and leave everyone at home, the answer is no,” Azzolina said.

“The kids are happy to be back at school. And they have to stay there. Even for the older ones, face-to-face teaching is essential because it guarantees training but also social relationships, for which young people would otherwise look elsewhere,” she said.

“The complementary use of digital teaching for high schools is already a reality and has made it possible not only to guarantee distance in the classroom, but also to greatly lighten the burden on public transport.”

The latest government decree allowed for a transport capacity of 80 per cent, which is difficult to achieve in practice. That is why health experts had recommended a 50 per cent capacity.

Regions are also seeking government subsidies amounting to 300 million euros to provide alternative transport given the reduction in passenger capacity would leave some 275,000 commuters travelling on foot.

The staggering of start times for students and office workers, along with an increase in ‘smart working’ would also help lessen congestion on buses, trains and trams.

With the current numbers from Covid-19, "Italian hospitals will be able to hold up for at least five months and at the moment the situation is manageable,” Carlo Palermo, head of medical union Anaao-Assomed said.

“But if we were to witness an exponential increase in cases as is happening in other countries like France then the hospital system would last no more than two months."

While hospitalisations and deaths with Covid-19 are on the rise in Italy, they are far from the levels reached in the first wave of the pandemic.