Mask outdoors except when running or jogging 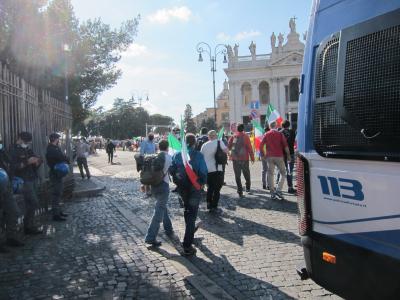 ROME – Jogging or ‘slow running’ does not require a mask – that’s the official word from the Interior Ministry, clearing up the doubts surrounding masks and physical activity, Italian media reported on Monday.

In a circular signed Sunday evening, Cabinet Minister Bruno Frattasi clarified that facemasks are obligatory for physical outdoor activities but not for those who run or jog.

For those engaging in basic ‘motor’ activity, such as going for a walk, the mask obligation remains.

Penalties for those flouting the rules range from 400 to 1000 euros.

Anti-Covid rules sparked several demonstrations in Rome across the weekend, resulting in 90 fines.

At the Eternal City’s famous marble mask – The Mouth of Truth (Bocca della Verità) – a sit-in was held against the Italian government’s management of the pandemic.

Protestors in orange vests claimed that under the “health dictatorship” the constitution no longer exists and people can no longer disagree or demonstrate.

"The mask is harmful, it makes us breathe our carbon dioxide,” Paolo Martini, 54, a sports manager from Frosinone, said. “We want a scientific committee that is also open to authoritative professors who think differently that no one is listening to. Why don't I put on the mask? There is a law that prohibits the disguise of the face,” he said.

According to another, “three children have already died in Germany of asphyxiation."

Police observed the protest from a distance. But there was a moment of tension when two young men cursing the press were removed by an elderly man in an orange vest who claimed to be a ‘retired police commissioner.’

The journalists were later subject to abuse by other activists.

Among the protestors, the idea is widespread that Covid is not as lethal as thought and none of them seem to have an acquaintance that has fallen ill.

Meanwhile, in San Giovanni a few thousand people showed up at the “Liberation March” to deny the dangers of COVID-19 and call for a return to the Italian lira currency.

Among the slogans shouted and written on placards: “No to the health dictatorship, instrument of a larger dictatorship that serves to destroy Western society.”

Many demonstrators had their masks below the mouth despite calls from presenters on the stage for the rules to be observed.

The first ‘no mask’ arrest took place shortly before 3 p.m. – a 35 year-old-Roman was detained for refusing to wear a mask and provide documents to police, who were present in large numbers.

In total, police identified 90 people not complying with the mask mandate.