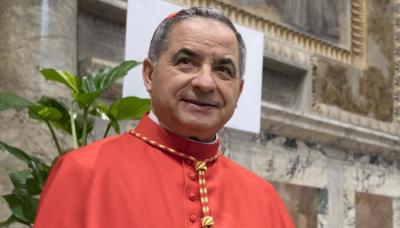 ROME - It reads like the plot of a daytime soap but the real-life drama of a prelate allegedly funneling funds to a woman dubbed the “cardinal’s dame” is being played out in the dark corners of the Vatican stage, according to Italian media reports.

The ‘dame’ – 39-year-old Cecilia Marogna from Cardinal Angelo Becciu’s home island of Sardinia – has reportedly received 500 thousand euros from the coffers of the Secretariat of State designated for humanitarian missions in Africa and Asia. Instead the funds have allegedly been used to buy expensive luxury fashion accessories and furnishings for her home.

This is the latest in a string of allegations to plague Cardinal Becciu who was forced to resign Sept. 24 amid a luxury London investment property scandal in which he was implicated.

Becciu, the Vatican’s deputy Secretariat of State between 2011 and 2018 before he was put in charge of the saint-making office, has denied all wrongdoing in the property deal.

Just days ago Italian media suggested 700,000 euros that had been transferred to an Australian account could be linked to tensions between Cardinal Becciu and Cardinal George Pell, who had recently returned to Rome after facing sexual abuse charges in Australia.

In the latest allegations to rock the Vatican, the cardinal maintains he was convinced the 500 thousand euros had been used by Marogna to finance the release of kidnapped missionaries.

According to Italian TV programme Le Iene funds from accounts managed by Becciu had been wired to Marogna’s Slovenian-based company and she used the money for luxury brand items such as designer bags from Prada and Chanel.

Ms Marongna, who reportedly passed herself off in the Vatican as Becciu’s niece, denies all the allegations.

“I spent [the money] on diplomatic trips, payments to information sources, mediation and transfers to humanitarian foundations,” Marongna said.

She dismisses as lies any notion that she is romantically linked to the prelate.

“Am I a lover of the cardinal? Absurd,” she said. “I’m a political analyst and intelligence expert who works honestly and lives in rented accommodation supporting her daughter.”