Normalisation with Israel: The view from the Arab Maghreb countries 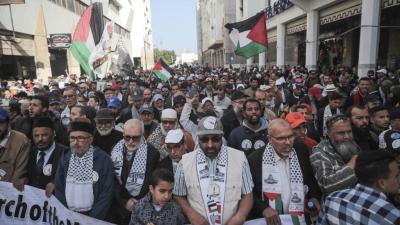 NEW YORK  - Earlier last month, President Donald Trump described the agreement to "normalise relations and forge a new relationship" between the UAE-Bahrain and Israel as a historic breakthrough. But in the wider Arab world, the deal has triggered mixed official reactions, ranging from support in the case of Egypt and Jordan to silence, to reluctance and rejection in the cases of Syria, Sudan and Lebanon, for example.

In the case of the Palestinians, it has been seen as abandonment and complicity against them by all sides. The Palestinian leadership, for instance, accused the UAE of betraying the Palestinian cause, and paving the way to more suffering and violations of their legitimate rights.

Hamas and others in the 'rejectionist' camp had harsher words.

But what is the stance of the Maghreb countries (Algeria, Morocco, and Tunisia) vis-a-vis this US-brokered deal between UAE, Bahrain and Israel and the US-led push for pan-Arab normalisation with Israel before the Palestinian-Israeli conflict is settled?

The curious case of Morocco

Morocco has been touted to follow the UAE and Bahrain in normalising relations with Israel, but Morocco's Prime Minister Saad-Eddine Othmani has since refuted such a claim.

During a parliament session, Mr. Othmani, who is also the leader of the Islamist Justice and Development Party (JDP), stated that Morocco backs the two-state solution, with East Jerusalem as the capital of a Palestinian state. Not mincing words, he said "any normalisation with the Zionist entity amounts to encouraging it to increase its violations against the Palestinian people."

Though King Mohamed VI serves as the chairman of the Organization of Islamic Cooperation (OIC) Jerusalem Committee, a title his late father King Hassan II held, Morocco and the Jewish state developed low-level relations in the wake of the 1993 Oslo Peace Accords between Palestinians and Israel. But when the Second Intifada broke out in September 2000, Rabat broke off with Tel Aviv.

Yet, relations have not been completely severed. Indeed, Amnesty International alleged that a malicious Israeli made spyware was used by Moroccan authorities to target Moroccan activists in the Hirak mass protest movement which took place in the Amazigh (Berber) speaking Rif region in 2016. Morocco has since refuted the claims.

In the meantime, The Times of Israel reported that Israeli Prime Minister Benjamin Netanyahu pushed for a three-way agreement by which the US would recognise Moroccan sovereignty over the long-disputed Western Sahara territory, in exchange for Morocco normalising relations with Israel.

Despite this active but unofficial involvement of Moroccan authorities with Israel, civil society strongly opposed the US-brokered deal. A case in point is the decision of a number of Moroccan writers and scholars, chosen for the Sheikh Zayed Book Award, who relinquished their participation in the ceremony as a protest against the normalisation agreement.

And despite the Covid-19 lockdown and social distancing measures, thousands of Moroccan protesters took to the streets in Rabat, chanting "Palestine is not for sale," and denouncing the US-brokered deal.

Tunisia: A history of solidarity

Tunisia's stance meanwhile is much less ambiguous.  President Kais Saied explicitly said that there would be no normalisation with Israel. In voicing his solidary with Palestinians, he noted that his country "will never accept turning the Palestinian right into a simple commodity." And he added, "we are still in a state of war with Israel."

It should be noted that Mr. Saied has always denounced what he called "the culture of defeat" in the Arab world; and his fierce statements against Israel have long been the central point of his anti-establishment drive.

While Tunisia has traditionally pursued a pragmatic foreign policy, which allowed the country to secure an economic lifeline from the West and a never-ending flow of millions of tourists, one has to acknowledge that pro-Palestinian sentiment runs deep in Tunisia.

Subsequent to the invasion of Lebanon by Israeli forces in 1982, for example, late Tunisian President Habib Bourguiba, despite being the first Arab leader to ever urge direct peace negotiations with Israel, hosted PLO Chairman Yasser Arafat and his 4,000 Palestinian fighters who were driven out of Lebanon.

Supporting the Palestinian cause came with an exorbitant price. In 1985, Israel blitzed Arafat's compound in the suburbs of Tunis, shedding both Palestinian and Tunisian blood. And in 1988, a Mossad hit squad liquidated Arafat's top aide, Abu Jihad, at his home in Sidi Bou-Said (17 km east of the capital, Tunis).

In view of these tragic events and the persistent Israeli-Palestinian conflict which affected the Tunisian avant-garde and of which Saied is an active member, he recently declared that normalisation with the Jewish state should be considered "high treason."

In Algeria, given its revolutionary anti-colonial history, the people continue to see Palestine as both a moral and anti-colonial issue, while the authorities still profess an unalienable support for just causes and liberation movements.

Since late president Houari Boumediene's renowned statement in a 1974 speech to the UN, "we support Palestine, whether it oppresses or it is oppressed," Algerian authorities have never missed an opportunity to underscore their active support and defend the legitimate rights of the Palestinian people.

It should be mentioned that Palestine's active solidarity and fundraising played a significant role in backing the Algerian Revolution from 1954 to 1962. In retrospect, the Algerian Revolution served as a paradigm for the Palestinian liberation movement, which Algeria also supported. And it was also in Algiers in 1988 that Yasser Arafat announced the creation of a Palestinian state.

In light of these strong ties between Algeria and Palestine, Algerian President Abdelmadjid Tebboune slammed the deal between Israel, Bahrain, and the UAE. In an interview with Algerian media, he reiterated that Algeria will never adhere to any normalisation treaty with Israel.

At a speech he delivered at the 75th UN General Assembly via video link, Mr. Tebboune affirmed that "the Palestinian issue is sacred for us and it is the mother of all issues and will not be resolved except by establishing a Palestinian state, with the 1967 borders, and with Holy Jerusalem as its capital".

Ultimately, it is clear that nobody in the three Maghrebi states snubs a genuine peaceful settlement to the Israeli-Palestinian conflict, but none of  them want to see the Palestinians thrown under the bus.

Even at the official level, which in the Arab world is often disconnected from the will of the people, the Maghreb governments will find it hard to brush aside the fervour with which their peoples still sanctify the Palestinian cause.

As a region with a dynamic and committed civil society which has always advocated pro-Palestinian stances, the Maghreb does not appear to be following Bahrain and UAE and their controversial strategy of rapprochement with Israel, any time soon.

Dr. Abdelkader CHEREF is an Algerian academic and a freelance journalist based in the US. He holds a PhD from the University of Exeter, Institute of Arab and Islamic Studies. His research interests are primarily in Politics in the MENA region (Middle East and North Africa), Democratization Processes, Islam / Islamism, and Political Violence with a special focus on the Maghreb. His publications are primarily concerned with cultural traditions and politics, and the intersection of the ‘public’ and the ‘personal.’