'Lockdown Italia,' through the lens of the foreign press

ROME – Italy’s Prime Minister, Giuseppe Conte and the mayor of Rome, Ms. Virginia Raggi, attended a preview of the photographic exhibition "Lockdown Italia - seen by the foreign press", in partial view, as "a tribute from the foreign press to the Italian people who faced the Covid-19 crisis with great courage and a sense of solidarity” as stated by the president of the Foreign Press Association in Italy, the American Patricia Thomas.

The president expressed appreciation and praise for the Italians who, almost all of them, have been able to respect rules and regulations, who have suffered damages, grief and contagion with dignity and self-denial, almost constituting an example for many other countries. Continuing, Thomas thanked the mayor Raggi for having promoted the availability of the Capitoline Museums to host the exhibition, consisting of 80 photos of 30 photographers from 11 countries, starting from 8th October until 1st November, thanking Conte for the his intervention also as author of the preface to the catalog of the exhibition itself. In turn, President Conte expressed words of thanks and applause "also for having offered the availability of this testimony with an accurate and even risky job because I realize that some of these photographs testify to the presence on the places where there was a high risk of contagion. It is a precious testimony for us Italians, and also for the world, of what we have experienced because it is an exhibition that, as has been mentioned, also has the peculiarity of being the first in the world on this pandemic and therefore an opportunity to retrace with the color and the clear clarity of the images what has been and what we have done to have ever greater awareness of what we have achieved even though we still have a lot to do; we are still in the midst of a pandemic and we must not let our guard down.”

Conte underlined that the challenges are by no means over and it is "truly from the post-war period to the present day the greatest challenge that concerns us, which touches us and involves us in all aspects of social, economic and cultural life, but I believe that this pandemic, despite the pain and the dramatic consequences, it now requires us to pursue a social and economic recovery and to improve the conditions of life because this is an opportunity to question ourselves, reinvent ourselves, and to try to do it in the best way." Finally, he thanked for this occasion "illuminating a dark and dramatic period of Italian life with these 'lights.’"

Ms. Raggi, signing the guest book, commented that it was an “unimaginable year, emotions, pains, predictions, dramas but … a humanity that resists and is reborn”. And she thanked the foreign media correspondents"for being at the forefront and stopping the moments that will remain indelible in our memory and a warning for the future.” 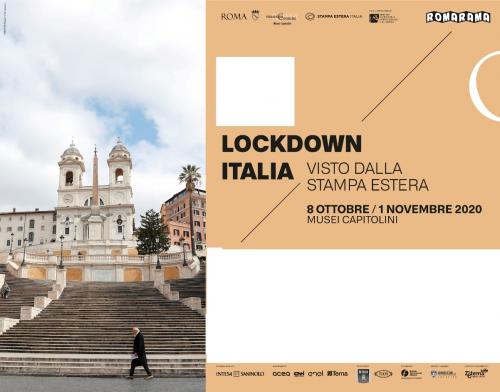