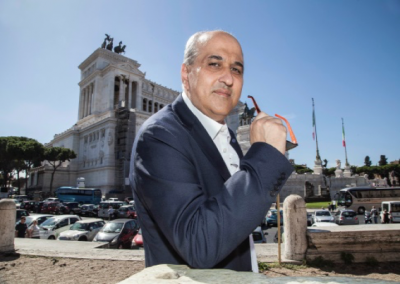 SALERNO – From Salvatore Quasimodo to Pirandello and Gabrielle Rossetti to Giuseppe Tomasi di Lampedusa, a constellation of poets, novelists and men and women of letters have long formed a cultural avant garde in southern Italy. Nestling south of Naples the ancient port city of Salerno and its surrounding province for its part contributed to the great 20th century hermetic poet Alfonso Gatti and another native son, Francesco Terrone, an entrepreneur turned prolific poet, is the latest bard to sustain this noble tradition of the mezzogiorno.

Ingegnere Terrone hails from the Salernitano town of Mercato San Severino whose two most famous luminaries were Gennaro Maria Sarnelli (1702-1744), a priest from the Redemptorist order who was beautified on the first step to becoming a saint, and Antonio Somma (1923-2005), an anti-fascist partisan, director of the CGIL trade union, an official in the Italian Communist Party from 1951 to 1989. As businessman Terrone shared the concern of both Sarnelli and Somma with the development of Italy’s south and his religious poetry recalls the fervour of Blessed Sarnelli for the redemption of the poor.

Much of Terrone’s verse is love poetry that often reflects the profound impact on Italian poets of the Greek classical myths. In his Icaro, for example, he composed:

Per volare insieme a te

Given his extensive engineering and business activities, one might think that Terrone’s poetry is a hobby, but he strongly denies this, calling it “a reason for life, magma that I feel boiling in the bottom of my soul, without which I could not live.” Ing. Terrone defines himself a pitagorico, inspired by the Greek mathematician and philosopher Pythagoras.

When meeting Ing. Terrone in his studio in Rome, with is immediately striking is his genial sense of humour and subtle sense of irony, evident in this dedication. “I dedicate these literary results to my Land and all those who wish me well,” he wrote.

“For those who do not wish me well, I will do my best to make them do so. Personally I love everyone.”

While developing his literary gifts as a young man, Terrone had to contend with the racism that too often faces southerners making their fortune in Italy’s industrialised north. His adventures as a recent graduate from the Federico II university of Naples when he arrived in Lecco, are described by the venerable RAI journalist Aldo Forbice in his book Il Viaggio dell’Ingegner Terrone, subtitled Il pericoloso percorso di un coraggioso imprenditore del sud (the dangerous path of a courageous southern entrepreneur) (Guerini e Associati, Milano, 2019).

“Terrone, pained by that shocking experience, found the strength to return to his home town, where, with other courageous young men he succeeded in creating a service company of national status.”

Forbice describes how the engineer poet’s treatment at the hands of racist and xenophobic northern Italians was compounded by his surname, used by vulgar northerners as a term of abuse meaning ‘peasant’ for southern Italians. In fact as recently as 2013, Forbice noted, a Lombardy judge, Davide Alvigini, ruled that calling somebody “terrone” was to be considered “racists” and sentenced a 64-year-old pensioner to pay a 400 euro fine and 2,000 euros in compensation.

Forbice, a Sicilian, noted that northerners are known to southerners as “polentoni,” or eaters of polenta. Until the 1990s banter between Italians from the north and south had been relatively harmless but in the 1990s northern racism toward the south was exacerbated by the xenophobia of Umberto Bossi and his Northern League party, which threatened the north seceding from Italy.

Francesco arrived in Lecco in April 1993 at age 31, two years after graduating in mechanical engineering in Naples.

He was immediately popular at a technical institute where he began teaching while looking for engineering work, but elsewhere in Lecco “when it happened to pronounce my name, even if I added that I was an engineer, there was hilarity, irony and often also insults prevailing on those cold, hostile faces of men and women, mostly, I imagined, electors of the Northern League,” he recalled. “They all looked at me suspiciously as if I was an alien. I felt a foreigner in Italy. Now I understand what workers from Eastern Europe can think about our country, without speaking of those who arrive, with suffering and risking their lives, from Libya, Tunisia, Syria, Iran, Bangladesh and other African and Asian countries. I felt then that the people from the northern regions had more respect for African immigrants than those coming from the regions of the Mezzogiorno.”

At one job interview with a textile engineering company, Francesco was told he should change his surname if he wanted to get hired. His drama made headlines in local newspapers and was adopted by two young cinema directors, Giulia Morganti and Salvatore Metastasio, in a film screenplay they wrote in 2015 entitled ‘caso Terrone.’

Cardinal Carlo Maria Martini, the Jesuit archbishop of Milan, also heard of the affair, and denounced racists from the pulpit during his next homily in the Duomo of Milan.

Fifteen years later Francesco returned to Lecco to challenge League leader Bossi, sending him 501 roses in the colours of the Italian tricolour flag, red, white and green. In a note to the politician attached, Francesco wrote “these 501 roses are to bear witness to the beauty of our flag, our country and our people. I would like to know however, why for 15 years Hon. Bossi you mortify the unity of our nation? Hoping that my surname does not represent an offense for your conscience, I send you my best regards.”

Bossi did not deign to reply. It is not known what happened to the roses. Forbice speculates that possibly Bossi gave them to his Sicilian wife.

Francesco took up his case again in 2004, writing to the Italian President, Carlo Azeglio Ciampi. His criticism of the League eventually was adopted by its new leader Matteo Salvini, who sought to distance the party from open racism to the south.

In his youth Francesco returned from his disappointing time in Lombardy to his home town of Mercato San Severino, setting up an engineering firm with a friend which was a harbinger for his ground-breaking Sidelmed company, a name in which med stood for the Mediterranean, underlining its southern roots. Specialising in research and development on job safety and relevant training, it employs today hundreds of people in Italy. Its management system has been adopted in all of Europe and even as far afield as Turkey, India and Kazakhstan.

Against this successful background Francesco continues to make time for his other, poetic profession. In 2009 he founded a publishing house, Iris, and in 2010 with other intellectuals, the “Frederic II International Academy for the development of science, art and culture.” In 2012 this was followed by the launching of the Francesco Terrone Foundation dedicated to promoting cultural events in Italy and abroad.

Francesco Terrone’s most inspiring publications include I Sette Doni dello Spirito Santo, with a preface written by Cardinal Giovanni Battista Re, it begins with a meditative poem: 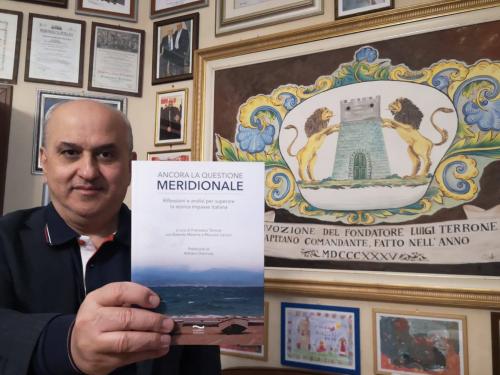 Ing. Terrone has written extensively on the future of southern Italy
Culture
Italy