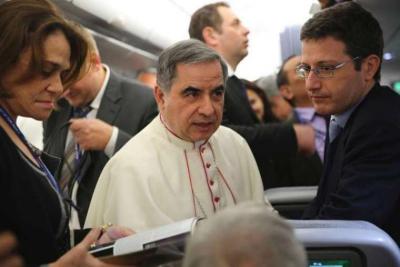 ROME – The Italian cardinal embroiled in an embezzlement scandal had invested an additional 100 million pounds in luxury apartments in London, according to the Financial Times.

New documents seen by the Times call into question the role of Cardinal Angelo Becciu in these investments at the time he went from deputy to acting Secretariat of State.

The purchases relate to “a portfolio of top-notch apartments in and around Cadogan Square, in Knightsbridge, one of the most expensive residential addresses in London,” the Times wrote. This was in addition to the Sloane Avenue building in Chelsea.

Pope Francis reportedly forced Becciu to resign as prefect of the Congregation for the Causes of Saints and renounce the rights associated with being a cardinal, following the allegations.

According to L’Espresso, the cardinal diverted money from the Italian Episcopal Conference (CEI) and Peter’s Pence to his family.

But Becciu, who strongly denies the claims, said he is ready to sue the weekly publication, accusing it of printing “absolute lies.”

The cardinal reportedly requested and obtained non-repayable loans in favour of the Spes Cooperative non-profit organization, which has ties to the local Caritas branch of Becciu’s former diocese of Ozieri in Sardinia. The Spes Cooperative is overseen by Becciu’s brother, Tonino.