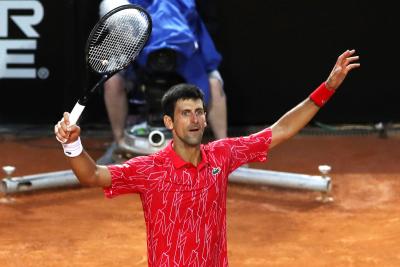 ROME - Little over three weeks since being controversially ejected from the US Open after accidentally hitting a line judge in the throat when striking a ball in anger, Novak Djokovic returned to the winners’ circle with an impressive victory in the Italian Open at Rome’s Foro Italico. In the women’s draw, world number 2, Simone Halep, won her first Italian Open title.

The Italian Open is normally seen as one of the curtain raisers for the summer of tennis and a solid barometer ahead of Roland Garros in June. However, as with everything in the world of sport and beyond, the tennis calendar has been forced to adapt to Covid-19 and as such, the tournament found itself in a September slot, albeit still just before the French Open.

This rearrangement is perhaps partly responsible for the bad weather which reared its head at times in the final, however as the rain abated and the weather improved during the first set, so did Djokovic’s game. Watched by a crowd of about 1,000 socially distanced fans, Djokovic started slowly against Argentine eighth seed Diego Schwartzman, finding himself two breaks down at 3-0. However, faced with the conqueror of top seed Rafa Nadal, the Serb quickly found his feet and successfully navigated a double bread of his own. Djokovic was denied on two set points before eventually taking the first set 7-5.

There was a similar pattern at the beginning of the second set with the Argentine racing into an early lead however this time there was no respite and Djokovic broke back immediately. Djokovic set up three match points after dragging Schwartzman left and right across centre count and sealed a fifth Italian Open crown when the Argentine sent a forehand wide.

"It was a great week, a very challenging week," said Djokovic in the immediate aftermath. "I don't think I played my best tennis throughout the entire week but I think I found my best tennis when I needed it the most in the decisive moments today, yesterday, practically every match. That makes me very satisfied and proud that I managed to find that fifth gear when it was most needed."

It must be said, however, that it wasn’t all plain sailing for Djokovic and after Nadal’s early exit, the Serb clearly felt the pressure to deliver another title in the Eternal City. With the memories of the US Open fresh in the tennis public’s mind, Djokovic lost his cool again midway through a victory over German qualifier Dominik Koepfer in the quarter-finals.

When Djokovic was broken to even the second set at 3-3, he whacked his racquet into the clay surface, breaking the frame and snapping the strings. Djokovic was forced to get a new racquet from his bag and received a warning from the umpire.

“It’s not the first racquet that I’ve broken in my career,” said the Serb. “I’ve done it before and I’ll probably do it again. I don’t want to do it but when it comes, it happens. That’s just me. Of course I’m not perfect and I’m doing my best. It’s not the best message out there, especially for the young tennis players looking at me, and I don’t encourage that – definitely.”

All this sets up perfectly for what could well be an epic French Open tussle between Djokovic as the pantomime villain and Rafa Nadal, the veritable king of the Parisian clay, who will aim to win a record-extending 13th French Open title and a Grand Slam that would equal Roger Federer’s tally of 20. The Swiss maestro will miss the rest of the season to recover from surgery on his knee.

In the women's singles at Roland Garros, Serena Williams will aim once again for a record-equalling 24th Grand Slam title, however unusually for a Grand Slam in the last decade, the American will not enter as favourite. That added pressure will be bestowed upon Simone Halep who triumphed against Czech, Karolina Pliskova, in Rome. Halep will be the top seed at the Grand Slam event in the absence of defending champion Ashleigh Barty, who does not want to travel from Australia because of coronavirus.

One interesting development, which has been seen across Italian sport in recent weeks, has been the reintroduction of fans to stadia. The 1,000 fans which attended the tennis at the Foro Italico has been replicated at football matches up and down the country and marks a new milestone in the Coronavirus crisis. It remains to be seen whether numbers will remain at such a low level or increase in the coming weeks, as plans to introduce a similar plan in other European countries have been either reduced or scrapped.

Authorities at the French Open who originally aimed to aimed to have 20,000 fans, or 60 percent of capacity, had reduced this to 11,500 across three sections of the grounds, then to 5,000 fans in line with previous limits imposed on public gatherings. After the recent surge in cases however, this has now been reduced to 1,000 people or just 3% of capacity, calling into question the viability of crowds at all.

Roland Garros officials are seeking an exemption from local authorities that would allow them to still have 5,000 fans each day despite new government restrictions. The tournament is allocating seating in its largest stadium, Court Philippe Chatrier.

"Today, it is more risky to go to a supermarket and to take the metro," said Guy Forget, the Tournament Director. "We hope we will be able to welcome fans to the French sporting event with the most international reach, by any measure."

Whether these proposals will have any impact on the government’s decision remains to be seen, however one thing is for certain, it will be a long time before any centre court returns to normality. We must hope that when tennis returns to the Foro Italico in 2021, the Italian Open is contested under a more positive light.