Italy and Algeria, a common history 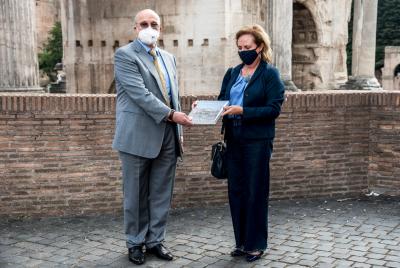 ROME - Reviving an old tradition, the Algerian Ambassador to Rome, H.E. Ahmed Boutache, paid a visit on Tuesday to the Mamertine Prison, a prestigious site in the Eternal City where,. according to historians, rests the King of Numidia, Jugurtha.The envoy made the visit in response to an invitation of the Complex of the Roman Forum, the Holy See, which is master of the premises, and the City of Rome.

His Excellency's presence in the company of the President of the Roman Forum and of the Colosseum, Dottoressa Alfonsina Russo, who came to welcome him in person, and the special consideration given to the Ambassador by the officials in charge of the site, by the Representative of the Minister of Culture Dario Franceschini and the representative of the Mayor of Rome, Lorenza Fruci and for the explanation part, the archaeologist Patrizia Fortini, participates we were told with a precise effort, at the center of the new dynamic between Algiers and Rome, encouraging the leaders of the two countries to jointly organize initiatives highlighting their common historical heritage. Also present were officials from the Algerian Embassy in Italy and the Italian authorities.

Mr. Boutache, surrounded by a number of journalists at the exit of the site, first wanted to thank his hosts: "this prison that I had the honor to visit today welcomes a great king of a great people, ours ; I therefore, in the name of all Algerians, paid homage to his memory by walking along this staircase which leads to the lower room where he lived his last hours; This was possible for me thanks to the good offices of our Italian friends, who as soon as they learned that I wanted to collect myself in front of the last known place of King Jugurtha, organized everything in record time!"

And he added: “I had to say to my interlocutors, on this day so charged with emotion, that in the light of the last years, we in Algeria intend to pay more attention to the culture and heritage, these dimensions which remain inseparable elements of our history and our present, and this, with a single goal, that of establishing the double rooting of our people, in its history, rich and unique and in the future."
The Ambassador underlined that the Italian experts, who came for the occasion, "assured me that beyond all scientific, technical and archaeological considerations, they wish to make Jugurtha known to the general Italian and international public and we are ready to contribute, through our executives and our researchers.”
In this regard, informed sources told Italian Insider that a colloquium on Jugurtha will be organized in Rome, before the end of the year, in the presence of leading international experts in heritage and archeology and the emphasis will focus on greater synergy between researchers and experts from both countries. A new dynamic, tells us an Italian diplomat on the spot, supported in the first place by the two heads of state, Abdelmadjid Tebboune and Sergio Mattarella, but also at the level of the Ministries of Foreign Affairs, Culture and Tourism, decided to work together to renew and promote the great common history of the two countries.
It should be noted that the site which was the place of detention of illustrious prisoners such as the Apostles Peter and Paul, Vercingetorix, King of Gaul and others, is today very little visited; a promotional effort can thus give it a boost. At least that's what Italian experts think and hope.
As for the President of the Rome Quadrennial, Umberto Croppi, who also made a point of being present, he shared with us his emotion, he who has dreamed so much of Algeria and its multi-millennial heritage;
“With this visit, a new dynamic has been created, which will allow us to go further in the cooperation between our institutions, insisting on everything that can strengthen our cooperation, the common work of promoting archaeological works and sites , support programs to train young Algerians in heritage restoration work and allow young Italians to put their knowledge into practice, within the framework of mixed missions in Algeria and Italy.
Example, among many others, the Mayor of Palermo, Leoluca Orlando, said he was very interested in the know-how of Algerian craftsmen for the restoration of Arab-Muslim sites in Sicily, we could in exchange, send Italian experts to the rehabilitation of Roman sites in Algeria. A win-win cooperation. And the Mayor of Palermo believes  that it is imperative that the basis of our future action be in continuity, ensuring the follow-up of our actions ”. A conviction which will be, we are told, a fundamental element of this new dynamic.
And one thing is certain, this week's visit, widely reported by the Roman press, put this tolerant and open image of Algeria into perspective...
jp-cc-mm 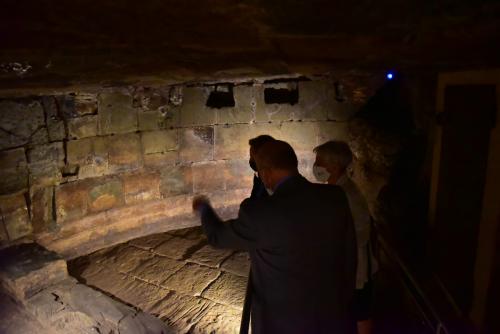