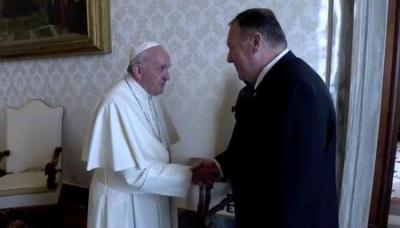 ROME – U.S. Secretary of State Mike Pompeo has urged Pope Francis not to renew a two-year-old agreement between China and the Vatican, Italian media reported on Monday.

The warning comes ahead of Mr Pompeo’s visit to Rome scheduled for Sept. 29, when he is expected to meet with the pontiff.

“Two years ago, the Holy See reached an agreement with the Chinese Communist Party, hoping to help China’s Catholics,” Mr. Pompeo wrote in a tweet. “Yet the CCP’s abuse of the faithful has only gotten worse. The Vatican endangers its moral authority, should it renew the deal.”

The 2018 Vatican-China deal reportedly allows the Chinese Communist Party to weigh in on the appointment of bishops for the church in China.

In a later tweet, Mr. Pompeo also highlighted China’s persecution of Uyghur Muslims  – “No regime suppresses faith on a larger scale than the Chinese Communist Party. Over 1 million Uyghurs and other Muslims have been forced into internment camps, subject to surveillance, torture, forced abortions, and sterilizations– all part of the CCP's decades-long war on faith.”

According to Vatican watchers, Mr Pompeo will try to intervene on renewal of the agreement, which is set to expire mid-October.

“The State Department is a strong voice for religious freedom in China and around the world. We will continue to do so and to be alongside Chinese Catholics. We ask the Vatican to join us,” Mr Pompeo said.

Mr Pompeo first expressed his views in a Sept. 18 essay for religious journal First Things – “If the Chinese Communist Party manages to bring the Catholic Church and other religious communities to heel, regimes that disdain human rights will be emboldened and the cost of resisting tyranny will rise for all brave religious believers who honor God above the autocrat of the day.”