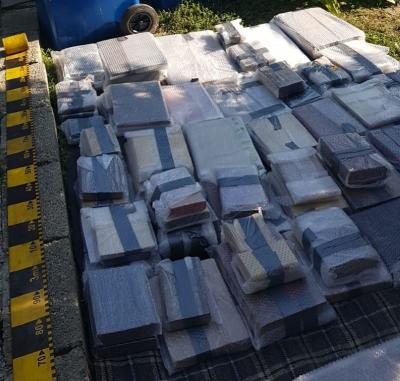 Image provided by the Carabinieri Command for the Protection of Cultural Heritage, Monza, shows rare and valuable books recovered in Romania

The historic tomes, including works by Galileo Galilei and Isaac Newton were uncovered Wednesday in Neamt County, Moldavia, following a joint operation between the Romanian, Italian and London police.

Stolen from Feltham, near Heathrow, in January 2017, the books have a combined value of more than £2.5 million, London’s Met Police said.

“These books are extremely valuable, but more importantly they are irreplaceable and are of great importance to international cultural heritage," Met Police Detective Inspector Andy Durham said in a statement.

In a sophisticated heist, thieves cut a hole in the skylights of the building and abseiled down to avoid motion sensors, police said.

The books, owned by a German and two Italian collectors, were waiting to be transported to America for an antique book fair when they were stolen.

According to Met Police, a Romanian organised crime gang was responsible.

The books will be returned to their owners.