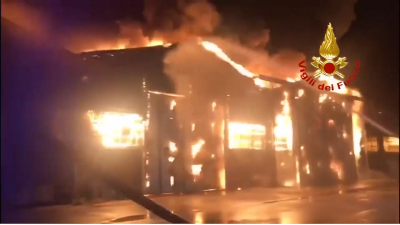 ANCONA - A huge blaze has devastated the port of Ancona in Italy’s central Marche region, destroying warehouses and sending noxious plumes of smoke throughout the city, local sources said on Wednesday.

The fire broke out at the former Tubimar inside a warehouse that housed solvents, paints and other potentially toxic materials where it is believed some acetylene cylinders exploded.

Sixteen fire fighting teams from Ancona, Macerata and Pesaro contained the blaze at around 2 a.m. Wednesday morning but continued to fight smaller outbreaks.

A truck driver passing through the area when the fire erupted said he heard at least 5-6 explosions.

“It seemed like Beirut, I thought I was going to die, be blown up,” the driver of the Greek camion said. “I couldn’t leave the truck. I waited and prayed.”

All schools, universities, parks and outdoor sports facilities, have been closed.

There are no reports of injuries.