HELSINKI – In light of the new update of the list of countries based on the national incidence rate of the virus, from 19 September 2020 Finland will reintroduce restrictive measures also for Italy. In practice, only entry for work will be allowed from Italy, for "essential reasons" and for the return of residents to Finland, with a 14-day recommendation of fiduciary self-isolation, while entry for tourism will not be allowed.

In the traffic light system, Italy practically passes from the list of green light countries to the orange one. The Finnish government has in fact established that from 19 September, every country that has registered in the last 14 days a quota of more than 25 infections per 100 thousand inhabitants will be considered "at risk" and, therefore, for those who come from it, restrictions will be introduced for entry to Finland; in addition, the Finnish authorities also consider travelers coming from “at risk” countries even those who pass through them for a mere airport stopover, as well as on the basis of the passenger's nationality and place of residence. Under this decision, Finland will only guarantee freedom of movement from 19 September from Germany, Sweden, Poland, Bulgaria, Norway, Slovakia, Lithuania, Estonia, Iceland, Cyprus, Latvia and Liechtenstein. Outside the EU / Schengen area, freedom of movement will be guaranteed to citizens of Australia, Canada, Japan, Georgia, New Zealand, Rwanda, South Korea, Thailand, Tunisia and Uruguay, if they come from those countries. This decision should remain in force until October 18, with updates to the list of "at risk" countries on a weekly basis.

Allowing access to visitors from Germany, Norway and Sweden somehow meets the complaints of Lapland tour operators, who are among those who are suffering the most economic damage from the drastic reduction from foreign basins traditionally suppliers of tourism.

Meanwhile, the Ministry of Transport and Communications has sent for comments a proposal to amend the Act on Transport Services, which aims to add new provisions to the law in case of negative results of infectious disease tests and on the presentation of a certificate, if the situation of the infectious disease required it. The obligation would apply to a situation where the Finnish Institute for Health and Welfare (THL) has proposed that measures are needed to limit the spread of a generally dangerous communicable disease in Finland.

Minister Timo Harakkasaid the government is preparing for a new wave of pandemic with a series of measures, and legislative changes are one of the means available. He believes that the proposal to request tests in the country of departure is one of the most pressing issues as it aims to prevent the spread of an infectious disease, but also to increase passenger confidence in the safety of the journey. His department is also preparing other legislative amendments to increase the powers of the transport authorities to ensure health safety. According to the draft proposal, the obligation to submit a certificate will depend on the disease situation in each region. Needs assessment would always be carried out by the health authority on the basis of available information on the incidence of the disease. The goal is for the law to enter into force during autumn 2020 and remain in effect until 31 December 2021.

Questions about travel to and from Finland: 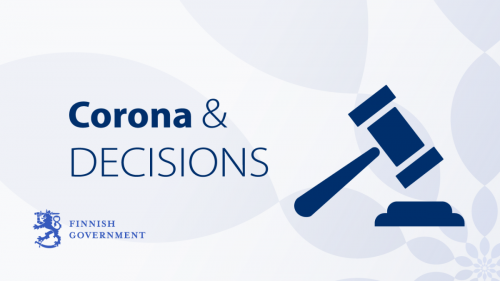