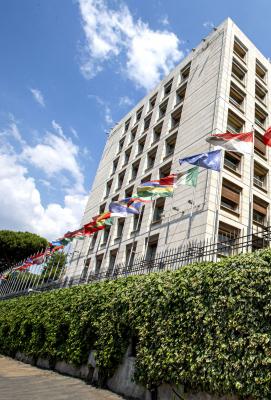 ROME -- A former senior economist at the UN Food and Agriculture organization has strongly denied reports that he allegedly defrauded the UN agency of as much as half a million euros, saying that he left the poverty-busting organization for family reasons following the break-up of his marriage.

"I completely refute this allegation," the economist, who for legal reasons cannot be identified, told the Italian Insider.
"It is well known that I left FAO on a mutual basis ... owing to a very acrimonious divorce (compounded by an exceptionally hostile wife) in order to spend time with my children ...," he said.
The British economist and statistician strongly denied FAO sources who earlier this month claimed that he was forced to leave after investigators discovered he had allegedly bilked as much as half a million euros from the UN agency using a sophisticated consultancy contract scam.
The economist, who had worked for FAO for over 10 years and received a salary worth as much as some dlrs 100,000 a year, allegedly decided to boost his income further by gaving research contracts to relatives and associates in the UK who were not qualified to carry out the research and then wrote up the reports himself, retrieving most of the hefty fees for himself and transferring much of the bilked money from the UK to Italy, the sources claimed.
FAO investigators after suspending the economist for six months while they probed his accounts allegedly asked him last year to leave the agency and in time honoured UN fashion he was even given a pay-off as a bonus for his fraudulent work in return for signing a confidentiality agreement under which he would not disclose his illegal activities, which would have been a serious embarrassment to the organization and raised questions with donor countries about management of the agency, according to the sources.
Investigators allegedly swooped on the P4 international civil servant after receiving a tip-off from a whistleblower who told Insider the case in their opinion was just the tip of an iceberg of similar fraudulent activity at FAO involcing consulting work.
“There are hundreds of similar scams at FAO involving unqualified ‘consultants,’” the whistleblower claimed, adding that they had been denied the whistleblower protection which the agency claims to offer.
There was no immediate comment from the FAO.
U.N.
Embassy Row