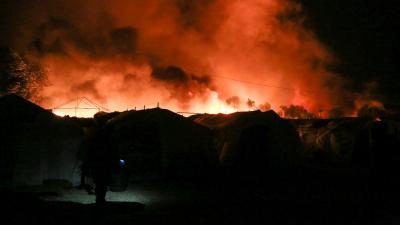 ROME – The Community of Sant’Egidio is urging EU countries to take in refugees that have been left homeless after fires destroyed Europe’s largest migrant camp on the Greek island of Lesbos.

Around 13,000 residents fled the blaze, allegedly started by migrants in protest against coronavirus quarantine rules, according to Greek media reports.

Additional restrictions were imposed on the asylum seekers living at the overcrowded Moria camp after a Somali resident tested positive for the virus in the past week.

According to fire officials, the blaze broke out just after midnight on Tuesday.

“The fire has spread inside and outside the camp and destroyed it. There are more than 12,000 migrants monitored by police on a highway,” Stratos Kytelis, mayor of the island’s capital city, Mytilene, told Skai radio.

Migrants would have to be moved or sheltered on ships to prevent spread of the virus, he said.

But Rome’s Sant’Egidio is calling for the urgent transfer of refugees to mainland camps “to avoid further tragedies of desperation”.

“These are asylum seekers who for months, some for years, have been living in conditions of extreme precariousness, after having made long and extremely risky journeys to escape from wars or unsustainable situations, mostly from Afghanistan,” Sant’Egidio said in statement.

Up to 40 per cent of the refugees are minors, they added.

Meanwhile Italy has recorded a jump in Covid-19 infections, according to the latest Ministry of Health data.

The number of tests carried out has also increased: more than 92,000 swabs have been processed compared with 52,553 on Monday.

10 more coronavirus deaths have been recorded.

The largest numbers of new infections have been recorded in the regions of Lombardy (271) and Campania (249).

Puglia has registered 143 new cases, of which 78 have been attributed to an outbreak in a company.

129 people in Lazio have tested positive for Covid-19, while Veneto has registered 105 new infections.