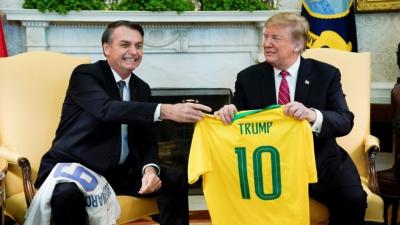 ROME - On Aug. 23, a respected Brazilian polling institute found that the country’s president, Jair Bolsonaro, enjoys an approval rating of 51 percent, the highest since he was elected. Brazil ranks second as the country with the highest number of coronavirus deaths (116,000), according to Wikipedia, after the United States where the death toll currently stands at 170,000.

But Bolsonaro – who has reduced the virus to “una Influencinha”, refused to wear a mask, harshly attacked the governors of the states who were taking control measures, and has appointed a member of the military as Minister of Health (after having thrown out two doctors) – is considered by Brazilian voters to be extraneous to the massacre.

Bolsonaro has always declared that the responsibility lies with the governors, and that he considered putting brakes on the economy as irresponsible. He granted aid of around 80 dollars to poor families, and today it is particularly popular in the poorest areas of the country, which have always been strongholds of former president Lulu.

The Republican Party convention, currently under way in the United States, has followed the same script. The responsibility for the massacre lies not with the President, but with the governors. The fact that the largest number of deaths are from Republican-ruled states, such as Texas and Florida, does not affect Trump voters; what counts is the word of the President. This is a president who has never believed in the virus, saying it would disappear “one of these days”. He intervened in the health debate, recommending taking kitchen detergents, and totally and blatantly ignoring famous virologist Anthony Fauci, director of the National Institute of Allergy and Infectious Diseases, who has advised six Presidents on HIV/AIDS and many other domestic and global health issues. But despite everything, thanks to the platform of the Congress, he has reduced the gap with Democratic Party presidential contender Joe Biden from 13 to 9 points. And there are many who listen to his accusations against Democratic Party governors of letting the agents of communism and anarchy act, while in reality protesters began mobilising due to the death of a black man, Frank Lloyd, suffocated for no apparent reason by a white policeman. Analyses predicting a victory for Trump in the upcoming presidential election have reappeared in the newspapers.

The virus has shown that a scientist is now somebody who tweets on social media; it makes no difference. In Madrid, Miguel Bose, singer son of two famous people, actress Lucia Bose and bullfighter Miguel Luis Dominguin, called a demonstration against masks in Plaza Colon. 2,500 people arrived, many of them shouting: The virus doesn’t exist. According to a Gallup poll, nearly 20 percent of Europeans will refuse the coronavirus vaccine when it comes. In the United States, the estimates are higher. Also, because everyone knows that the virus was a Bill Gates’ creation and that the vaccine will introduce a chip into the human body, thanks to which the world can be controlled. In Italy, one MP has raised a complaint in Parliament: whoever wears a mask is of the left, because they agree to reducing their freedom, whoever does not is doing so because they are free, a recurring theme of the right.And that in any case this is a Chinese virus (Trump’s definition) created in a laboratory in Wuhan, to rule the world: the proof is that the Chinese immediately controlled the epidemic, and their economy has suffered less than others. The Chinese reply that it was American soldiers who had come to a ceremony who introduced the virus to China in order to destroy their growing power. The scientific explanation that the virus came from an infected animal that infected the food chain does not convince anyone. Meanwhile, the number of those who believe the Earth is flat is on the rise, as are those who deny the theory of evolution, because the Bible says that Creation was accomplished in seven days. Let’s not go on to explain the theory classified as QAnon, which claims that we are under a conspiracy of personalities in very high positions who, in the meantime, want to get rid of Trump in order to take over the world (a theory that Trump has relaunched): now it is taking root in Europe.

Conspiracy theories are on the rise everywhere, and with greater fervour. Once upon a time, deniers denied the climate emergency. Despite all the evidence. Now they also deny the virus, although we are rapidly moving towards at least 800,000 official deaths. It is as if the city of Marseille had disappeared.These denial or conspiracy theories bring a smile to the faces of citizens who believe in science and numbers. But there is one detail they should be worried about: the deniers also vote.

It is time to link the crisis of democracy to denial and conspiracy theories. “The best argument against democracy is a five-minute conversation with the average voter,” Churchill once said. We may add that the kings of virus denial, Trump and Bolsonaro, were democratically elected, and today enjoy considerable popular support. According to FactCheck, Trump has told over 20,000 lies since he was elected. But according to Fox and his voters, it is the others who are lying.

The Romans said that the Gods, before ruining men, make them mad. If true, the virus and the climate emergency would have been sent by the Gods.