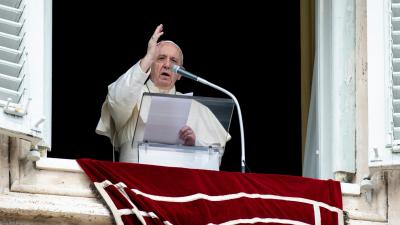 VATICAN CITY – The new Pope Video has been released the day before the World Day of Prayer for the Care of Creation, calling for a more equal sharing and responsibility of the world's resources.

The theme for this month is care for the planet’s resources. In the context of the Season of Creation, which is celebrated from Sep. 1 to Oct. 4 and in the fifth anniversary year of Laudato si’, the Holy Father expresses his concern for the “ecological debt” that is created when natural resources are exploited. He calls for them to be “shared in a just and respectful manner.”

Several NGOs are joining this campaign for the care of creation, including GasMuHa, an organization active in Haiti supporting small communities and promoting their social development projects.

Pope Francis’ message about caring for creation is forceful: “We’re squeezing out the planet’s goods. Squeezing them out.” For this reason, he encourages all people to become aware of the grave “ecological debt” that is being generated, fruit of the exploitation of natural resources and of the action of certain multinationals that “do abroad what they would never be allowed to do in their own countries.” For the Holy Father, this situation is urgent: “Today, not tomorrow; today, we have to take care of Creation responsibly.”

To give an example of the unequal use of resources, some international reports indicate that nearly a billion people go to sleep hungry every night. This is not because there isn’t enough food for everyone, but because of the “deep injustice in the way food is produced and accessed.” In part, this is due to “the increasing corporate power in food production, the climate crisis and the unfair access to natural resources, which impact on people’s ability to grow and buy food.” This situation is particularly prejudicial to “women, who work in agriculture more than any other sector and produce much of the world’s food.” In a report on extractive industries, the UN states that these businesses “present particular challenges for both fragile states and developing nations; the exploitation of non-renewable natural resources, including oil, gas, minerals and timber has often been cited as a key factor in triggering, escalating or sustaining violent conflicts around the globe.”

Fr. Frédéric Fornos S.J., International Director of the Pope's Worldwide Prayer Network (which includes the Eucharistic Youth Movement- EYM), said, “In these times of pandemic, we are more aware, as the Holy Father has said several times, of the importance of our common home, which reminds us of the need to take care of the planet’s resources. In May of this year, he sent a video message inviting everyone to ‘respond to the ecological crisis, the cry of the earth and the cry of the poor.’ The year 2020 is the year of the fifth anniversary of this encyclical dedicated to care for our common home: today more than ever we have to listen to this cry and promote an integral ecology concretely, with a sober and solidary style of personal and community life. Let us pray for this, because it is a path of conversion.”

The video can be watched at this link https://thepopevideo.org/