A Renaissance after the earthquake 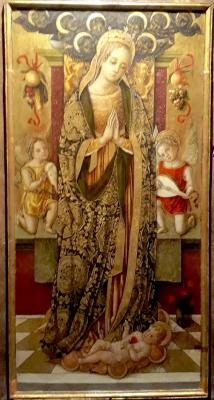 ROME -  Four years ago, in August 2016, large areas of central Italy were devastated by a series of earth tremors that virtually wiped out a string of small municipalities and hamlets dotted along the fault line of the Apennines belt in the three separate regions of Umbria, Lazio and Marche.

Considered by seismologists to be second only to the Messina earthquake in 1908, reports of the disaster filled newspaper headlines all over the world for days on end. In comparison with the Messina catastrophe, which claimed an estimated 250,000 victims, however, loss of life was fortunately on a much smaller scale, thanks to the efficiency of modern Italian rescue operations.

Salvage operations did not involve only the unfortunate inhabitants of the area, but also the inestimable artistic patrimony that lay, in most part virtually unknown, in the ancient churches, religious houses and civic museums scattered over the territory. In the days and weeks following the tremors, thousands of art works were recovered, sometimes at great risk, and stored in separate repositories in their home regions - Spoleto in Umbria, Celano in Abruzzo and Ancona and Ascoli Piceno in Marche.

The present coronavirus crisis has momentarily deflected attention from the plight of the devastated earthquake zones. Reconstruction work, in fact, has proceeded at snail's pace, mainly due to the labyrinthine Italian bureaucratic procedures involved. In one field, however, recovery has gone ahead uninterrupted. A legion of experts of various disciplines have been working to repair and restore the damaged treasures of the earthquake zone.

The first results can be seen in Rome in the exhibition “Rinascimento Marchigiano. Opere d'arte restaurate dai luoghi del sisma” (Marche Renaissance. Restored works of art from the earthquake zone) in the Museum Complex of the Church of San Salvatore in Lauro, near Piazza Navona, where 36 works dating from '400 to '700 are on display. The exhibition actually opened on the 18th February (2020) but was forced to close almost immediately because of the epidemic. Now re-opened, it has been prolonged until the 20th September 2020.

The small but comprehensive exhibition gives a sweeping overview of the artistic production that blossomed even in the most remote little towns and villages. Many are by obscure minor artists, others are anonymous, but all reflect the spirit and devotion of the communities that commissioned them. As was explained to me when I visited the deposit of thousands of paintings and devotional objects in the Lazio store house last year, their value is not so much material but lies  rather in what they mean to their local community, where the citizens identify closely with their churches and the works of art they contain. This concept, in fact, was clearly understood by the Italian authorities, who avoided what was probably the more practical solution of one big central depot and workshop.

The present exhibition, therefore, is confined to the Marche region and is the result of the united efforts of local institutions, such as the Marche branch of ANCI (the National Association of Italian Municipalities), the Marche regional government and the Fondazione Pio Sodalizio dei Piceni (Pious Sodality of the Picenes). The latter is a venerable organization dating from 1600, originally  conceived as a mutual help association for Marchegiani citizens resident in Rome, and its historic seat just off Via dei Coronari has provided the exhibition venue. The works cover a wide range of religious subjects and includes paintings, artefacts and sculptures.

A 15th century “Praying Madonna with Child and Angel Musicians” by Vittorio Crivelli from the hamlet of Sartiano dazzles with its gleaming gold background and richly embroidered robe of the Virgin. Hanging opposite are six miniatures from the Jacobello del Fiore cycle depicting the Life of St. Lucy from the Palazzo dei Priori in Fermo, (two are still under restoration). The 16th century artist Cola dell'Amatrice is represented by a “Nativity with Saints Jerome, Francis, Antonio of Padua and James of the Marches”, rescued from the sacristy of the Church of St. Francis in Ascoli Piceno, as well as by his striking “Redeemer”. This painting, the last surviving fragment of a cycle of frescos that decorated the wall of the refectory of the Church of the Annunciation in Ascoli Piceno, had to be detached from its masonry base. It was so grey and faded that the subject was almost invisible. After cleaning and restoration, it is now miraculously transformed.

In the past, if a wall or tower was hindering rescue operations it simply got knocked down, but now art historians coordinate with the army and fire brigade to avoid unnecessary destruction. Italy is unique in having a special culture rescue corps, known as the Blue Helmets task force (Caschi Blu per la Cultura), which also operates under the aegis of UNESCO. Set up with, one might say, uncanny timing in February 2016, it is composed of a select group of carabinieriand experts from the Italian cultural ministry, including restorers, art historians, architects and archaeologists.

Other works include a “Visitation” from the Chapel of the Virgins in Macerata by Giovanni Baglione, and a “St. Frances of Polo putting out the Flames of the Furnace” by Giovanni Serodine, from the Church of S. Francesco at Matelica. Both these artists were contemporaries of Caravaggio and show the effects of his influence.

On show are a number of unusual exhibits, like the moving 16th century German-inspired Vesperbild, wooden Pietàs where the Madonna's grief is emphasized, even to the point of having raised tears carved on her cheeks. On a lighter tone, the centre of one of the rooms is dominated by a series of cavorting chubby cherubs decorating 19th century cupboard doors from the Church of Saints Peter and Antony the Abbot from Monsampietro Morico, near Fermo.

Star of the exhibition is the polyptych of “The Madonna and Child with Saints and Apostles” - a huge altar piece by an unknown artist (perhaps Giuliano Presutti) that was extracted from the badly damaged Church of San Francesco in the small town of Monte San Pietrangeli. Visitors to the exhibition can watch a video documenting the data analysis systems used and the meticulous restoration process carried out by the School of Conservation and Restoration of the University of Urbino Carlo Bo. Apart from the earthquake damage, the altar piece had been eaten by woodworm and coated in the past with resins that had ruined the colours. Under the supervision of art historian Claudio Maggini, a group of multidisciplinary professionals worked for months to recover the work.

When the exhibition closes, it will move back to home territory, and is programmed to run until November in the Ducal Palace of Senigallia. The fate of many of these works of art is, however, uncertain. Many come from buildings which have crumbled and cannot be rebuilt. At the moment, over 6,000 damaged art works lie in deposits in the region.

The Marche regional authorities have assured, however, that the works which eventually cannot be  returned to their original homes will be looked after and stored in places that will be open to  the public. 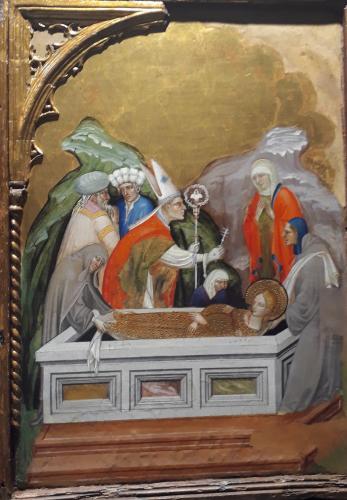 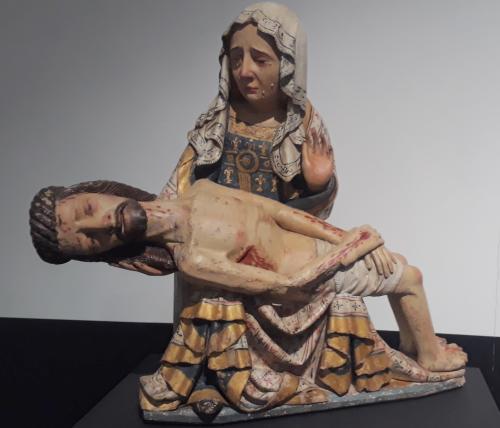