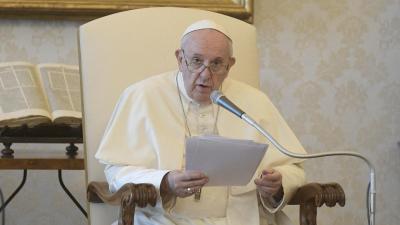 VATICAN CITY – Pope Francis once more highlighted the global, social imbalances that have been accentuated as a result of the Coronavirus pandemic.

In his weekly address on Wednesday, Francis spoke of “symptoms of inequality revealing a social illness.” In a speech that reflected upon global economy, faith, the pandemic and climate destruction, the pope termed economical inequality a “virus.”

Later Francis referenced the Bible, saying “There exists a ‘relationship of responsible reciprocity’ between us and nature.” The pontiff also underlined frankly the social imbalance surrounding wealth, saying “Homo sapiens is deformed and becomes a type of homo oeconomicus – in a harmful sense – individualist, calculating and dominating.”

Francis had earlier talked about the crisis surrounding the Cornavirus, saying “The pandemic has highlighted and aggravated social problems, above all inequality…Some powerful nations can emit money to confront the emergency, while for others this would mean mortgaging the future.”

The Vatican had recently come under scrutiny for its relationship with China and its government. Specifically regarding the pope’s silence on the problems in Hong Kong, there was concern over an agreement between China and the Vatican that had been kept secret by the Chinese government. A Hong Kong cardinal, Joseph Zen, accused the Vatican of “selling out Chinese Catholics.”

On Tuesday, the Chinese Foreign Minister arrived in Rome while embarking on a European tour where once more the Hong Kong protests were discussed. Speaking with Italian Minister for Foreign Affairs, Luigi di Maio, the Chinese Minister, Wang Yi, defended China’s influence in Hong Kong, saying “the reason for the security law is to fix the faults that had existed for many years.” Di Maio said in a press conference after the meeting that "I reiterated that without European partners we believe that the stability and prosperity of Hong Kong, on the basis of the one country two systems principle are essential." There were protests from Italian political parties Forza Italia and the Radicals over the arrival of Wang.