UN and IOM call for action after 45 migrants drown 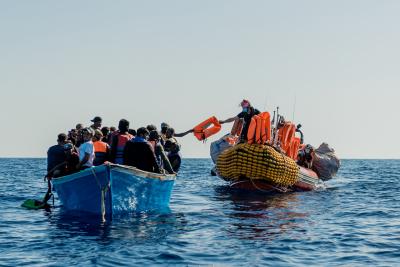 ROME – A large shipwreck off the Libyan coast saw 45 migrants drown on Monday and the UNHCR, United Nations High Commissioner for Refugees and IOM, the International Organization for Migration have called for more action.

Around 37 of those on board the ship, principally migrants from Senegal, Mali, Chad and Ghana, survived after being rescued by local fishermen. They told the IOM that 45 people died , the worst such incident this year, including five minors, as a result of the explosion of the boat’s motor off the coast near Libyan city Zuwara.

The two organisations have sent out an appeal to Mediterranean states to review their approach to the management of rescue services in the area. They state that the current capacity for search and rescue need to be increased urgently to respond better to requests for rescue. They fear that if there is not a sudden increase in capacity there will be a risk of similar tragedies taking place.

The UNHCR and OIM also express extreme concern over recent delays in operations of search and rescue and ask states to respond quickly to verify events and find a safe port for those people rescued at sea. They further demand that in cases where merchant ships find themselves in the best position to offer help, they must be offered somewhere to dock and let those rescued disembark. Those merchant ships should not be ordered to take those rescued back to Libya where they face the risk of conflict, suffering and human rights abuses.

The rescue operations are being carried out more and more by Libyan ships and more than 7,000 persons have been taken back to Libya this year. In the absence of guarantees of safety for those taken back to Libya, the UNHCR and IOM demand that all forms of support are reconsidered and all duties of search and rescue redefined.

At least 302 migrants and refugees have died this year along the route and according to data from UNHCR and the Missing Migrants project, the number is probably higher. More than 17,000 people have landed in Italy and Malta having crossed the sea from Libya and Tunisia, an increase three times greater than 2019. However, the number is far less than in the years prior to 2019 and the two organisations are asking the EU for an abandonment of the ad hoc adoption of agreements in favour of a more structured mechanism being used by the coastal countries.

In the context of the Covid-19 pandemic, two thirds of European states have found a way to manage their borders in an effective manner allowing asylum seekers access at the same time. The UNHCR and IOM recognise the continued problems posed by migrants arriving by sea and ask all coastal Mediterranean states not to stop allowing them into their countries. Medical controls carried out at the border as well as certificates of good health or periods of temporary quarantine have been implemented by numerous countries in order to allow migrants to enter their countries.

The organisations also point out the fundamental role played by NGO boats in these situations in the face of a drastic reduction in the interventions carried out by European States.