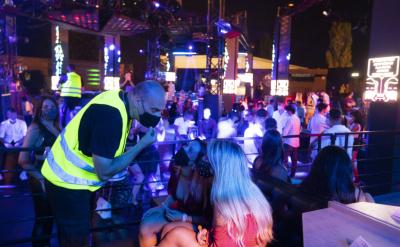 ROME – Nightclub owners around Italy are objecting to the government’s decision, announced on Monday, to close all clubs from Sunday until at least Sep. 7.

The Italian national consortium for nightclubs and other dance venues, SILB, has sent an appeal, asking for their immediate re-opening, to the regional administrative court of Lazio, reports Corriere della Sera. The President of Silb, Maurizio Pasca, said  “We are not going to be the scapegoat.” According to Pasca, the sector “is on the verge of collapse and always gets accused of being principally responsible for every problem.”

The Italian health minister, Roberto Speranza, on Monday set forth the new rule that orders the closure of “dancefloors, discotheques and similar spaces, whether open or closed.” The order also outlined the obligatory wearing of face masks from 6 p.m to 6 a.m. in certain public spaces. In the decree it states that the places in which one must wear a mask during those hours are “where because of their physical nature, gatherings are easier.” However, this will include even open, outdoor public spaces, particularly those tailored towards nightlife.

Daniela Santanchè, an Italian senator and nightclub owner, wrote on her twitter account that “I’m going ahead, my business will stay open. Banning young people from dancing is like terrorism.”  The president of the region of Liguria, Giovanni Toti, also refused to toe the party line, saying in an interview with Corriere della Sera that he was “against the closure of discos, but in favour of putting a stop to some of the scenes that we have seen in the last few days.”

There have been suggestions in Italy that regional lockdowns may be introduced as the country battles to fight back the spread of the virus during the Summer months. Agostino Miozzo, co-ordinator of Cts, the technical scientific committee, warned in an interview with Il Messaggero that “If we keep going like this, soon we will have more than a thousand new cases a day.” Miozzo then went on “If we go past certain numbers…closures will be necessary. I’m talking about local lockdowns, that’s clear.”

Fears are rising that the introduction of new restrictive measures may be the first steps towards a return to the full-scale lockdown that Italians experienced in the first months of the pandemic. The minister for regional affairs, Francesco Boccia, attempted to assuage some of those concerns saying “A lockdown like March or April would be unthinkable, we can’t permit that to happen.”

On Saturday there was another increase in new cases of Coronavirus in Italy, with 629 people reported as being newly positive in 24 hours. On Tuesday the numbers dropped with 320 declared new cases recorded in 24 hours, although fewer tests were carried out. The state of the pandemic in Italy is precarious and tensions are high as cases have been increasing over the last few weeks while the return to school is imminent.