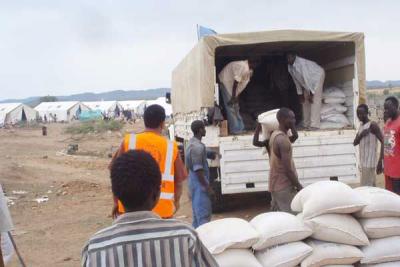 UN World Food Programme (WFP) staff work through gunfire, shells, earthquakes and radiation alerts in the field. The 2012 Awards of Merit, described in WFP’s latest edition of the internal magazine ‘Pipeline’, tell the stories of these courageous workers.

The team in Japan had to work in dangerous and unprecedented conditions when they sent aid to help the country recover from a devastating earthquake and tsunami in March 2011.

The disaster killed 19,000 people as well as causing terrible damage in the affected areas. WFP immediately launched a special operation deploying more than 30 staff. The Japan team, including one WFP worker, Kohiro Nakal, who relocated to Japan from Darfur to help his home country, then had to deal with unprecedented conditions; the threat of nuclear radiation, the only emergency situation WFP staff are not trained for.

Chief of WFP’s Medical Services, Dr. Sergio Arena, told Pipeline it was the first time WFP had to work in a possibly radioactive environment. “Unlike all other WFP emergency situations, we have guidance for guerrilla attacks, malaria, banditry, child-soldier confrontations, nut nothing for radiation and entering a contaminated environment.”

“When you have so much uncertainty – your employer says it’s safe and the media says it isn’t – and when you have kids, a spouse begging you not to go, it’s a rather frightening and a tough position to be in. It really shows the bravery and character of the team.”

Equally courageous was the WFP team in Libya, which withstood the violence during the uprising against Col. Muammar Gaddafi. At the start of the conflict, Pipeline states that “only a handful of national staff were stationed in Benghazi” to run an operation that trucked food to Sudan and Chad.

The “handful” were five men, who quickly became the front runners of an emergency operation. Ramadan Al Haddad described the uncertainty of the first few days as the uprising gained momentum: “We didn’t know what was lying ahead or what to expect – especially with the security situation deteriorating throughout the whole country.”

The workers evacuated their families to a safer area and continued alone to hold the humanitarian front. “Our obligation was not only to ensure the safety and protection of our families, but also our warehouses in the port and offices, so we had to leave our loved ones to make sure that WFP food and equipment were safe.”

The Pipeline magazine says that the “heroic actions of this team throughout the whole crisis allowed WFP to address humanitarian needs and become the lead agency for providing logistics support to the humanitarian community.”

Logistics Officer Matthew Dee said the team were vital in providing aid to the city. “It was through their good relations with all partners on the ground that WFP was able to offload vessels while the city was under attack and secure warehouses for storing food, medical and other humanitarian supplies to help thousands of desperate people trapped by the fighting.”

A Sudan team in June last year also evacuated their families, but returned themselves to the front line in order to continue WFP’s work. Senior programme assistant Saad yousif walked his children away from the sound of gunfire when fighting broke out between the Sudan Armed Forces and the Sudan People’s Liberation Army in Kadugli.

There was a larger team based in the area at the time than there had been in Libya, nearly 60 including workers and their families. The staff had to get their families through the fighting to a sub-office where a UN military escort  were expected to evacuate them to a compound outside of the city.

However, the escort was still awaiting government clearance and “never arrived.” The staff, now dodging heavy shell fire, decided to evacuate themselves, their dependents and a further 50 NGO workers and their families who had sought refuge in the WFP office.

The trip, which according to Pipeline usually takes 15 minutes, took “two terrifying hours,” in a 12-vehicle convoy. The internal magazine states that their “risky decision to move everyone despite the fighting saved lives: the Kadugli sub-office was attacked and badly damaged within hours of departure.”

Five WFP staff opted to stay behind at the UNMIS compound for three additional weeks. Despite the clear  dangers to themselves, they continued to work to maintain food distributions in the area. “These were poor people who couldn’t afford a car or a bus to get away,” said one of the workers, Ahmed Fadul.