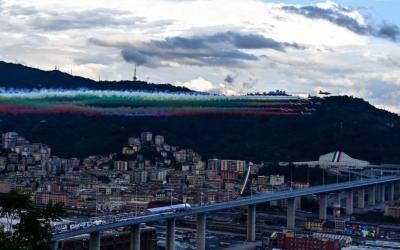 The Frecce Tricolori fly over the new bridge

GENOA - Two years after the horrific collapse of the famous Morandi bridge, Renzo Piano’s newly designed structure was inaugurated in a moving ceremony.

The Italian President, Sergio Matarella, and Prime Minister, Giuseppe Conte, were in attendance as tributes were paid to the 43 victims of the disaster on August 14 2018.

The relatives of those victims however, chose not to attend, with Egle Possetti, leader of the support group for the victims’ families saying to Radio Capital that “This bridge doesn’t belong to us, because for us this bridge is a continuation of the previous and for us, to be up there would be very difficult.”

La Repubblica reports that the President of the Republic, Mattarella, met privately with the families of the victims on arrival in Genoa and spoke of “a wound that cannot be healed.” The government faced much criticism after the former bridge’s collapse as concerns had been raised over its safety for many years before.

The St. George bridge, as it is now named, was designed by Renzo Piano, the famous Genoese architect who also designed the Shard and the Pompidou Centre. Speaking on Monday, Piano reflected that “I hope that the bridge is loved. To be loved in tragedy is not easy, but I believe it will be loved because it is simple and strong like Genoa.”

During the ceremony, the Italian tricolore was displayed over the bridge as well as the flag of St. George, the Saint of the Ligurian city. The Frecce Tricolori, planes from the Italian air force, also performed a flyover to commemorate the opening of the new bridge. The names of the 43 victims were read out one by one in a sombre inauguration ceremony.