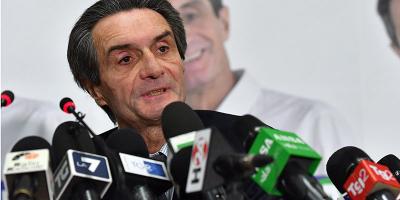 MILAN -- Finance police have confiscated thousands of protective gowns from a factory belonging to the brother-in law of Governor of Lombardy Attilio Fontana as an investigation into murky business dealings by the League politician's family during Covid accelerated in a mushrooming scandal, police said.

In the middle of the pandemic, April 16, when his region of Lombardy was suffering more than any other, Fontana, a member of right-wing party League, signed a deal to buy 75,000 gowns for 513,000 euros. However, the company commissioned for the deal, Dama Spa, was owned by Fontana’s brother in law, Andrea Dini.

Ten percent of Dama Spa’s shares are also owned by Dini’s sister and Fontana’s wife, Roberta. This lead to severe concern of a conflict of interest, especially due to the fact that Dini’s company had not signed the “Integrity Pact” designed to obstruct any such conflict.

On May 20, with tension swirling in Lombardy about these dealings coming to light, Dini sent an email to the Region of Lombardy, declaring that “we have decided to transform the supply contract into a donation.” Unfortunately, an indirect written piece of evidence shows that it was Fontana himself who had told Dini to do so three days earlier.

The water was further muddied by the fact that at this point, only one third of the gowns had been delivered, there were 25,000 still unanswered for. As reported in Corriere della Sera, on May 19, unbeknownst to either his brother-in-law or his wife, Fontana transferred 250,000 euros from a Swiss bank account to his brother-in-law’s company, to make up for the money Dama Spa had not received.

This enormous bank transfer, which would constitute almost 50 percent of the original contract, was blocked in line with anti-money laundering regulations. In July, an investigation was launched by the public prosecutor’s office of Milan into Fontana, Dini and Filippo Bongiovanni, head of the region’s centre for government commerce for possible public supply fraud.

The question falls to the specific decision to change the contract into a donation and the lack of fulfilment of the original commission in its entirety. In fact, Corriere della Sera reports that there is no official document stating an acceptance of the commission for gowns as a donation rather than a contract, and so this defence may well be null.

On Thursday a WhatsApp message between Dini and the Lombardy governor, Fontana, revealed that the brother-in-law held back the 25,000 gowns to sell them again later. The message reads “We’ll sell the gowns at 9 euros, and then of every 1000 sold we can donate 100” and was sent a mere two hours before the email to change the contract into a donation. This has lead to controversy and outrage that the family might have tried to benefit financially from the Coronavirus pandemic, especially in Lombardy where 16,000 people have died out of 35,000 across Italy.

The 25,000 missing gowns were found at the premises of Dini’s company, Dama Spa, on Tuesday, which further darkens the case for the three men under investigation.