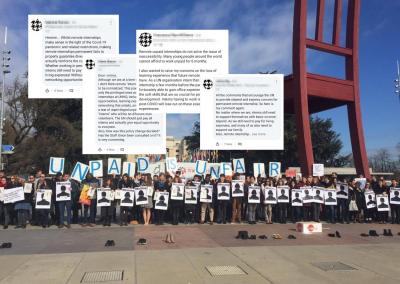 ROME – As agencies of the United Nations continue with a process of unpaid remote internships, over 1000 UN staff and interns have urged the UN chief not to go ahead with plans to introduce them on a permanent basis, according to a press statement Fair Internship Initiative (FII), a network of action groups strategically placed in major UN cities that lobbies for fair and quality internships in UN agencies. “All opportunities for networking, mentoring, learning, cross-training and attending events that makes the internship experience complete are gone and I am now just basically an unpaid consultant basically,” an anonymous intern was quoted as saying.

In an open letter to the Secretary-General, the FII have criticized the UN proposed move as a step towards even greater inequality within the UN’s already controversial unpaid internship programme, with the lack of transparency from management bodies suggesting that interns may end up isolated, unpaid, and exploited in the long-term.

The exploitative practice is particularly troubling at time when many young people are facing economic uncertainties. "Since interns are economically constrained, normally we have living arrangements that are not well suited for teleworking. Bad access to the internet, crowded apartments, no computer that works well, etc,” said another anonymous intern.

According to the FII, the UN administration has declined a dialogue on this matter, and HR chiefs in headquarters deny the new policies.

The FII’s open letter calls for urgent action to stop this process, and, with their over 1000 signatories, stated that the measures should only be considered for exceptional circumstances imposed by the COVID-19 crisis.

“Despite the perception that going remote is a positive push, this runs the risk of causing greater negative impact for youth. It will compromise the quality of internships by limiting exposure to the UN environment, the diplomatic world, networking opportunities and essential in-office experiences,” the FII statement read. “Far from opening up opportunities, this will further compound disparities between those who can afford an unpaid remote internship, and those who cannot — leaving disadvantaged youth behind.”

The FII has condemned the move as a “mere attempt to treat the symptoms rather than addressing the root causes of an unjust system.”