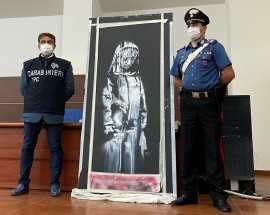 SANT’OMERO – The stolen emergency exit door of the Bataclan that was decorated by Banksy, the most famous street artist in the world, symbolically depicting a woman in pain, has been recovered from an Italian country house and moved to Rome, where it will be kept over the next few days before returning to Paris, according to local police. The Bataclan massacre occurred on Nov. 13, 2015, and 90 people were killed.

The handover of the door occurred at the Palazzo Farnese in Rome, given to French Amassador to Italy, Christian Masset, for the ceremony of the French National Day on Tuesday. “This door witnessed the massacre, but many people passed through here who managed to escape. It has a high value for our memory and is also a symbol of the excellence of Italian-French cooperation,” said Masset, as quoted in Il Messaggero.

The door was stolen in Jan. 2019, and was found over a year later, on June 10, 2020, in a house in the Abruzzo countryside. The investigations led French police to arrest 12 people including French, Italians, and Turks, two of whom are accused of organising the theft, and four accused of having hidden the door, reports Il Sole 24 Ore.

“I must say that we were not surprised by the place because it is customary for us to find works of art in unexpected places,” said Roberto Riccardi, commander of the Carabinieri for the Protection of Cultural Heritage.

“Stolen works travel and go everywhere,” he said, as quoted in Il Messaggero.